Leo woman Scorpio man compatibility duo do not make a blissful match. These two do not like each other, and they will find one another incredibly irritating. They do have a strong level of trust, which could help them to overcome some of their struggles, but it is rare that this pair will find true love.

The Leo woman is often known for her striking resemblance to her zodiac animal, the lion. This is because of their strong senses of pride, and leadership qualities. During day to day life, she pays a lot of attention to her outward appearance, and how other people see her. She does her best to make other people see her in an extremely positive light. Equally, she loves receiving admiration from others. This is not difficult, however, because of her becoming personality.

The Leo woman is amazingly charming and charismatic, making her an enjoyable person to be around. She has a certain zest for life that appeals to others and makes her appear interesting. Passion and drive are also qualities that she possesses, which makes her an incredibly good leader. She is talented at directing the way for other people, and she has a passionate approach to everything she does, which makes her fit for leadership.

Another central part of her personality is her inflated ego. This is a key thing that makes her stand out as a Leo. The Leo woman requires compliments and words of affection for her to properly thrive. She has a high opinion of herself, and values her wants and needs more so than other people’s.

Luxury is also another crucial thing that the Leo woman wants from her life. Whether it is objects, clothes or experiences, she is no stranger to splashing the cash to have the highest quality of life. She may believe that having these luxurious items will strengthen her public image, and this will contribute to her ego.

When it comes to Leo woman Scorpio man relationship, the Leo woman will have one of two reactions, and it may be difficult to realize which until the time comes. If she does not feel as if she is receiving the adequate levels of love and attention from her partner, or if she feels that he isn’t inspiring, she will flee as soon as possible. On the other hand, if her partner can give her those crucial things, she is one of the most loving and passionate people he could ever meet. She will treat him with the utmost respect, and endeavor to be a perfect partner for him

The Scorpio man is full of mystery, and nobody knows what is going on in his mind. He presents himself as a cool, collected person, and rarely lets his emotions show. The Scorpio man is almost like the Christian Grey of the zodiac signs. He tends to be brooding, mysterious, and dominating. He is an incredibly powerful person, and his mind holds a lot of strength.

Women tend to gravitate towards the Scorpio man because of the mystery he seems to possesses. The average woman tends to be attracted to mystery, and men they feel that they have something to teach. If a man appears troubled or distant, many women believe that they can “fix” them, and enrich their lives. This is the case with many women who want relationships with Scorpio men. 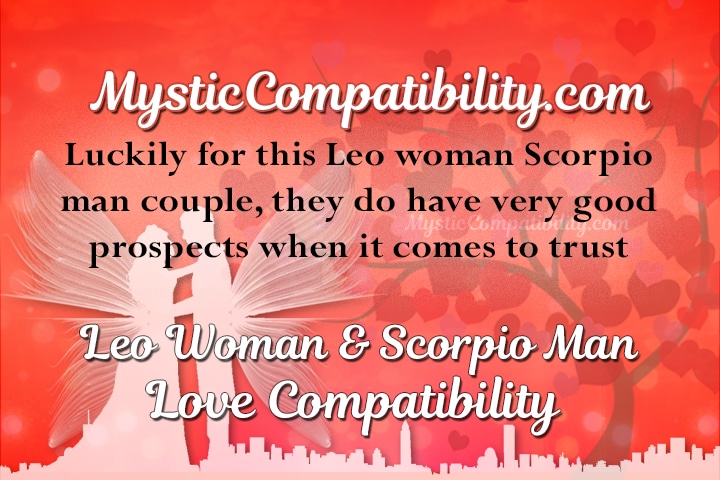 On the inside, a Scorpio man tends to be very deep. He analyses things frequently and has some very intriguing thoughts and opinions on many subjects. Emotions are not his strong point, and he tends to bottle up his true feelings towards things. Outward displays of affection are not his style, and he prefers to show his love in more subtle ways.

If a woman is looking for a dominant, masculine type of man, the Scorpio is the perfect fit. He has a way of steering things in the direction he desires, including his partners. His great demeanor makes him mildly intimidating and incredibly masculine, so he makes a perfect partner for somebody who may struggle to do things alone. It could be difficult to indulge in Leo woman Scorpio man love affair since the Scorpio man dislikes being chased. He would much rather be the one doing the chasing, as this makes him feel strong.

Most of the time, the Leo woman Scorpio man love match will be highly unsuccessful. They annoy each other, and the main word that can be used to describe their attitudes towards each other is “hate.”

Luckily for this Leo woman Scorpio man couple, they do have excellent prospects when it comes to trust. The Leo woman is an incredibly transparent person, while the Scorpio man is an honest one, so they will have very few problems with putting their faith in each other. Although they may not be happy in many ways, they can always count on their mutual trust for each other. Trust is an incredible foundation for a relationship, and it can save many couples from facing breakups. If Leo woman Scorpio man sun signs are in love, and they trust each other, there is nothing that they cannot overcome.

Leo woman Scorpio man marriage will also have very few problems when it comes to finding things to talk about. They both have a slightly obsessive nature, so anything that they enjoy, they enjoy to the fullest extent. The Scorpio man will deeply respect the passion that radiates from the Leo woman, and this can create a good foundation for conversation. While love may not be on the cards for this pair, they will be able to respect and befriend each other. This happens due to their similar interests.

It is not uncommon for the Leo woman Scorpio man love compatibility pair to misunderstand each other completely. They do not mix well, as they have very different views and opinions on things. They are controlling people, and this will cause them to clash frequently. Leo woman Scorpio man dating approaches to many things will differ, which could cause a lot of arguments between them.

When it comes to Leo woman Scorpio man sex, this couple is not the perfect match for each other. The Leo woman and Scorpio man see sex in very different lights. This will cause many problems in their relationship. What the Leo woman sees as sexy will appear superficial, and the Scorpio’s idea of love will seem too depressing. Leo woman Scorpio man in bed will rarely have intimate, passionate sex because they are unable to find a mutual ground of what is pleasurable. Neither will be able to reach their fullest levels of satisfaction with each other. Thus this could take a toll on both of them.

Overall, the one word used to describe the Leo woman Scorpio man zodiac match is “hate.” In the Leo woman Scorpio man affair, they have incredibly differing views on life. Moreover, they do not have the emotional connection required to have a healthy relationship. This pair will most likely irritate the living daylights out of each other, and find it incredibly difficult to get along. It is not often that the Scorpio man Leo woman lovebirds attempt to pursue a relationship together because they simply do not get along well. An emotional connection between two people is almost compulsory to have a successful relationship. This couple’s hatred for each other will ultimately defy any possibilities of this.

Leo woman Scorpio man soulmates could also have problems with power struggles in their match. Leo woman Scorpio lovers man are naturally born leaders. They both enjoy feeling in charge and leading their partner in a particular direction. This could cause the pair to have plenty of arguments, and they will not enjoy each other’ attitudes.

Leo woman Scorpio man compatibility match do not mix well. They bring out the worst in each other. Moreover, it is uncommon that they will have a happy, healthy relationship. Overall, this couple is not very well suited, and they should avoid the misery that comes along with this relationship.