The Taurus woman Scorpio man compatibility pair have a bond almost like no other. This match is one of the best possible, and it will provide a pleased and passionate relationship. A Taurus woman is stubborn and sticks to her principles. When faced with confrontation, she will often give her challenger the “silent treatment,” as she sees arguing as petty and holds herself above it. She needs a man who can offer her stability, and who is straightforward. Her main values lie within the home, as she likes to take on the role of “traditional housewife.”

A Taurus woman sees the home as something very close to her heart and will do her best to make it a comforting, welcoming environment. She is a homebody, and would much prefer a home-cooked meal at home with her family than going out to a nightclub. She is a very sensually charged person and likes to involve all five senses in her pleasurable experiences- especially sex. She will please her partner in the Taurus woman Scorpio man love. No doubt, she loves the feeling of gentle touch.

Any man who has the pleasure of having sex with a Taurus woman will know how sensual and caring she is when it comes to the bedroom. She will love her partner a great deal, and she prefers a long-term Taurus woman Scorpio man related to a short fling. Once committed, she will love forever. However, once her trust has been broken, she will most likely never trust again, as she is good at holding grudges.

Scorpio men are very intense, thoughtful people. They don’t tend to share their inner monologue with anybody. Strangely enough, this can make them seem reserved and shy. They are very observant, and constantly analyze their surroundings. They may ask a lot of questions to expand their knowledge of the world around them. He can often be moody, and it is not wise to attempt to criticise him. The Scorpio man is typically hard to tie down, as he possesses a strong sexual hunger that cannot be satisfied. Under his hard exterior, he is compassionate and lonely, but he will not share this with anybody.

However, when a Scorpio man is in a Taurus woman Scorpio man love match, he will be amazingly kind and loving towards his partner. He will cherish her and become easily jealous, as he values her so much. He is ideal for any woman who likes to feel as if her partner has a protective power over her, as it can be in Scorpios nature to hold his partner under his wing.

Taurus woman Scorpio man marriage will be full to the brim with love, and this pair will become inseparable. Both will love each other beyond belief, and they will make each other very happy. This is an amazing opportunity for them. Of course, any sane person would leap into this relationship, as it has so much to offer. The Taurus woman Scorpio man star signs complement each other very nicely, and they bring out the best in each other. 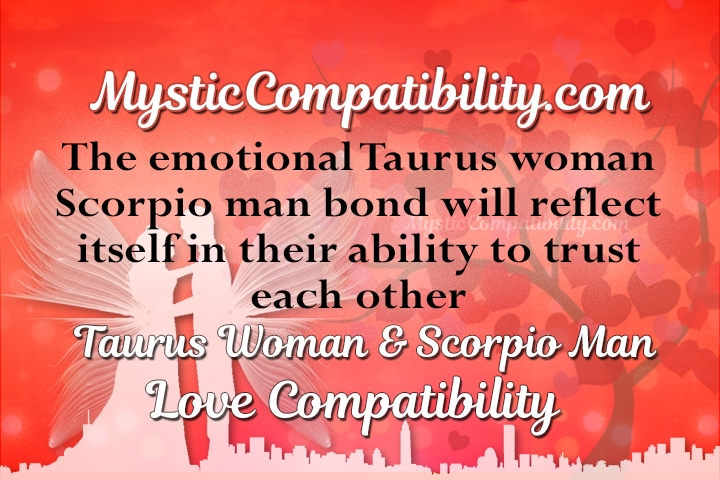 The sexual relationship between a Taurus woman and a Scorpio man is one to be scorned. Both reflect extreme sexual energy, and when combined it is truly something to be marveled at. Their sexual experiences will be emotionally charged, which both will adore. Taurus woman Scorpio man sex will be loving, tender, but also somewhat desperate and sometimes slightly rough due to extreme passion. This pair will become deeply intimate, and eventually become inseparable. No other zodiac couple could have the emotional connection that exists in the Taurus woman Scorpio man union, and this will show greatly.

The emotional Taurus woman Scorpio man bond will reflect itself in their ability to trust each other. They will feel each other on such a deep level that they will have no issues in trusting each other. A Scorpio man will commonly have trouble opening up to a partner, but the emotional connection he has with his Taurus woman will prevent him from being closed off, and he will almost certainly allow himself to show his true self to her. This is an incredible feat, as Scorpio men are known to almost never open up to anybody. His Taurus woman will not disappoint him, as she can provide the support he needs to feel confident that he has not made a mistake in showing his true self.

The Taurus woman Scorpio man soulmates pair will also startle each other with how interested they are in what the other has to say. A Scorpio man may go into detail about things his Taurus woman doesn’t care about, but her love for knowledge will have her hanging onto his every word. The Taurus woman will surprise herself with this, and will also be shocked by the Scorpio’s understanding of life. They will not have heard his views before, and this will cause her to find him extremely interesting and intriguing.

The pair has an intense emotional connection. Accordingly, this affects their core values. Their main priorities will become each other, and their Taurus woman Scorpio man relationship itself. Nothing else will matter to these two except for each other. This is a sign of true love, as they will be so smitten with each other they believe that their partner is the only thing in the world they could need.

A Scorpio man will be on the same physical level as his Taurus woman. As a homebody, she may be prone to opting for a day inside, rather than going out. To most people, they would end up feeling confined but not to a Scorpio man. He will be very content with staying with his partner all day, giving each other love and support. On the other hand, he is also more than happy to go out on his own without feeling awkward and is willing to try anything alone. This will benefit both of them, as they will need their alone time after being together as their emotional connection is so intense.

There are almost no cons to this amazing Taurus woman Scorpio man love compatibility. The only problem that may arise is when the Scorpio man chooses not to open up to his Taurus woman. This might not be disastrous, but it could be a problem. Most Scorpio men within this relationship will open up, but there are a few that won’t. These few will be putting the Taurus woman Scorpio man love match at risk, despite its incredible potential. His Taurus woman will not wait forever, due to her stubborn nature, and in return could become withdrawn and guarded as a reaction to her Scorpio man’s secretiveness. This is a rare occurrence, however, and will not happen on most occasions.

At the end of the day, Taurus woman Scorpio man compatibility pair is a relationship to be truly jealous of. Both of these signs have an undeniable love and adoration for each other, and nothing can come between them. Their sexual experiences will be so brilliant to the point where neither will ever want to have another partner again, as they can only give each other the pleasure they desire. They have an amazing emotional connection that cannot be replicated by any other zodiac couple. This is an amazing opportunity for both signs and should not be matched. Their sexual chemistry, emotional connection, and all around perfection will go far. This pair will be inseparable, not that they would ever want to give each other up.