Scorpio man is usually born between October 23rd through November 22nd. However, the cusp dates for each sign can sometimes change based on leap years and other events. If a person is born on one of the cusp dates, they should check the Scorpio zodiac dates for the year they were born in to know if they are really a Scorpio or if they are a Libra of Sagittarius instead.

The Scorpio man traits show that he is a fan of both serious and casual relationships. However, he wants to know what he is getting into from the start. He will be disappointed if he wants a long term relationship and ends up having a short term relationship. He is a fun guy and he likes to have a good time. The Scorpio male is not likely to argue much. He may cheat if he does not know he is supposed to be in a committed relationship. Otherwise, he is highly unlikely to cheat.

The Scorpio man in love also likes to keep things creative and exciting in bed. He will want to be with someone who wants the same, but it will not be a deal-breaker if they are not very creative. Either way, the Scorpio man is sure to be a passionate sexual lover, no matter what kind of partner he is with.

The Scorpio man personality seems to leak out confidence, and because of this, he can do just about anything that he puts his mind to. He will be happiest doing a job that allows him to work with other people and puts his own creativity into whatever project he is working on. The Scorpio guy cannot do a job that will make him hurt or be a disadvantage to others in any way. He wants to get ahead in life but not like that. He will likely be happiest as an artist, writer, detective, psychologist, or as a scientist. 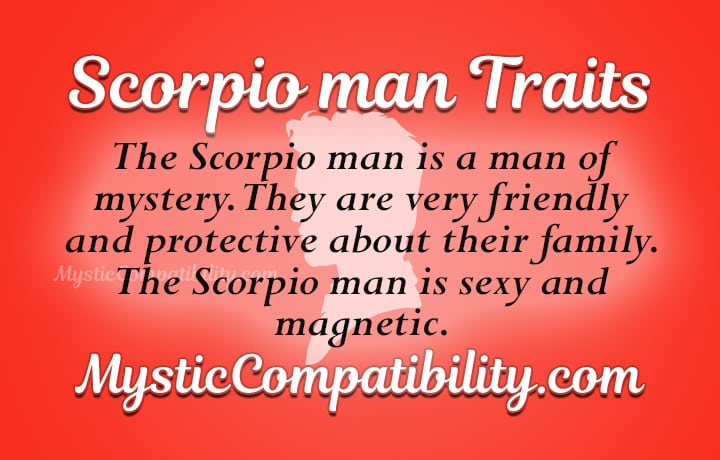 The Scorpio man characteristics show that he feels uncomfortable when handing over his money to someone else, so he tries to do it as little as possible. This means that he doesn’t spend his money often. But it may also suggest that he will be wary of putting his money in a bank as well. Instead, he is more likely to hoard his money in his home. He may splurge every now and again on something he doesn’t need. But for the most part, he is great with money.

The Scorpio man is one of the healthier men of the zodiac signs. He doesn’t have much of a problem with exercising or eating a healthy diet like some of the other sun signs do. He also does not tend to get sick often, and when he does fall ill it does not usually last for very long. Scorpio men have great immune systems that can help them to get over just about any physical ailment. What they might need help with is dealing with mental ailments. The Scorpio male is sensitive, and little things tend to build up in his mind. He is going to need someone in his life who he can talk to about this to make sure that it does not bring him down.

The ruling body parts for the Scorpio man are his genitals. This can make some Scorpio men have higher sex drives than other men of the zodiac. However, it can also mean that they are more likely to face health problems in this area. They should get check ups regularly to make sure their sexual health is still top notch.

The Scorpio man is one of the most friendly men of the zodiac signs. He seems to be able to make friends wherever he goes. He is naturally charming, but he doesn’t actually know it. He is not judgemental, which is part of the reason why so many people like him. The Scorpio personality traits show that he wants to be able to learn whatever he can about his friends because he loves to be able to learn from them. At the same time, he does not want to share too much about himself. By not doing this, he keeps an attractive air of mystery around him.

The Scorpio man often has many friends. He will be closer to some people who he will be able to share his every secret with. While other friends will just be kept casual. He will hang out with these people when he wants a good time, not when he wants to talk about something deep and philosophical. Just because he has many friends does not mean that he is not loyal. In fact, the Scorpio man is one of the most loyal zodiac signs. He is sure to be true to each and every one of his friends.

The Scorpio boy and man both love to spend a lot of time with their families. Family reunions, game nights or even just a quiet night in watching a movie can all make cherished memories for years to come. He will stay close to all of his kind family members as he grows up. But he is not afraid to cut toxic people, even if they are family members, out of his life. He wants to be surrounded by people who lift him up, not bring him down. Because of this, he does his best to support his family members.

If the Scorpio man ever becomes a father, he is likely to be a little protective, but for the most part, he will let his children have more freedom than some of the other zodiac signs would allow. He will encourage his children to act much like he does because he loves his own Scorpio personality. But he will not be upset if they choose a different path in life. All he really wants is for his children to make many friends, have a spark of creativity, and to live happy lives.

The Scorpio man is sexy and he knows it and he dresses so that everyone else will know it, too! He follows the trends so he can be fashion forward. Bold colors like red and purple will help him to stand out from the crowd, whether he is trying to or not. The Scorpio guy knows how to make himself look sexy in even the most casual look, like wearing jeans, to the classiest looks, like wearing a full suit. He will wear whatever he thinks is appropriate for the occasion.

Scorpio men like some jewelry, but they don’t want to use anything crazy. They see jewelry and other accessories as tools to making them more fashionable. However, they don’t want to wear anything that is fancy just for the sake of being fancy. He may wear a ring or two to accent his look. But he will never be caught wearing a ton of bracelets and necklaces just to look cool. To him, jewelry is best in moderation.

The Scorpio man traits show that he may think he is mysterious. But he is as open as a book to his close friends and family members. He is a fun man who is great to be around, and anyone would be lucky to be his friend.