Unfortunately, the Taurus woman Leo man compatibility match will not bring a Taurus woman the man of her dreams. The differences and similarities between these two are of the negative variety. Hence will cause issues in their relationship. Taurus women are extremely beautiful beings, and they will do their best to ensure that all five senses are brought into every sexual experience. She is a sexual goddess and will give her partner pleasure in every sense of the word.

She is incredibly loving, and values touch from her partner almost more than anything else. This does not just involve Taurus woman Leo man sex. No doubt, she adores romantic touch just as much. A Taurus woman can be quite traditional, and she enjoys being a stereotypical housewife. She is a homebody, and prefer staying at home with a bag of popcorn and a romantic comedy than going to the local nightclub for a boogie. A Taurus woman will always give her partner unlimited affection, and provide him with anything he desires. She is brilliant at nurturing, making her a good mother.

However, when faced with confrontations, she does not handle things well. She will often become silent and refuse to have contact with the person she is being challenged by. She sees herself as “above” fighting, so will not engage with anybody who may criticise her.

A Leo man is amazingly confident and charming. He may have a lot of people lusting after him due to his incredible personality and brilliant sense of humor. He is easily won over by compliments and affection, as he likes to feel adored. A Leo man will fall for anybody who can make them laugh because he is an amazingly light-hearted person. He loves the finer things in life, and will often treat himself to designer clothes and fancy dinners. This is not for selfish reasons, but he believes that to be comfortable, one must buy the best of the best in any given situation.

His expensive taste also adds to their desirability, so many Leos will become used to having people fight for their affection. This could make them big-headed, so they must be cautious of this. They think highly of themselves, yes, but in a way that enables them to take good care of themselves, not in a way that they would hold themselves higher than others. They are generous and loving people and would do anything to keep their Taurus woman Leo man relationship a bliss. 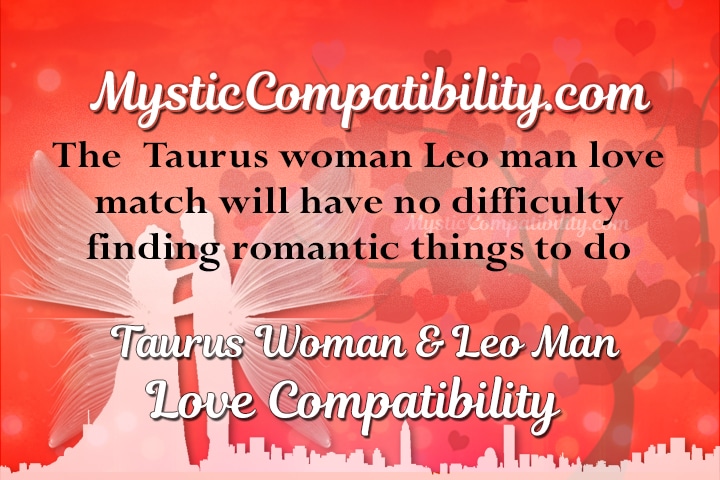 These signs could have good trust levels with each other if neither has been known to commit infidelities before. Neither sign feels the need to lie, and they understand that honesty is the key to a good relationship. The Taurus woman Leo man love match will have no difficulty finding romantic things to do. They will either idle together or go their separate ways. This will cause few arguments, as neither sign shows a problem with this.

Taurus woman Leo man sexual relationship could be very tricky. Both can be very selfish when it comes to sex, and both are prone to allowing their partner to do all of the work. Taurus women love to relax and allow their partner to touch and delight their bodies, Leo men like to lie and be taken care of. This could cause a clash of laziness, as both signs struggle to be on the receiving end as quickly as possible. This will make sex less than satisfactory for both of them since neither can receive satisfaction from the other. Rushing to be on the receiving end of the pleasure, neither person will be able to fully relax and give their partner the enjoyable time they wish for.

This relationship may have a good prospect for trust, but if either has a previous habit of cheating, this will not stop. Taurus woman Leo man star signs are stubborn signs and have little will to change. No matter how much they are hurting their partner, both the Taurus woman Leo man lovers will be reluctant to change their old habits for the better. At the same time, both will expect a change in the other, causing eventual distrust and betrayal.

When it comes to communication, this match could potentially be an absolute disaster. Leo men tend to be very egotistical and think they are right in most situations. They feel as if their character is being questioned when somebody thinks that one of their opinions are wrong, and will become incredibly hurt. Taurus women will become incredibly guarded and defensive when challenged, retreating into themselves and refusing to communicate.

They often give their partner the “silent treatment,” causing more conflict to evolve. When the Taurus woman Leo man soulmates are faced with an argument, both will be rigid and unforgiving. Neither will intent to reconcile and will stand their ground for as long as it takes. They are unyielding signs, so it is unlikely that either will attempt to make the first move towards fixing things.

These signs are both satisfied with doing little activity together, but it will affect them negatively in the long run. Taurus woman Leo man in love will become disinterested and distant, and they will struggle to have anything in common. Unfortunately, this relationship has few pros about cons.

This relationship could be incredibly challenging to the average Taurus woman Leo man dating each other. They will struggle to find common ground in which they can do things together. In every relationship, there are things that the couple must aim to work as a team. The problem lies when neither sign is interested in the same eventual goals. Goals are important in a relationship because it opens up an opportunity to grow together as a couple. Additionally, it gives an incentive to stick together as a team. Without this, the Taurus woman Leo man lovebirds have no reason to stay together. Thus, they will be better off apart, aiming for their own goals. This is the problem that lies between Leo and Taurus.

A Taurus woman is family orientated and will try her hardest to make her life revolve around a home. She wants to have a comfortable, stable life with somebody tender and giving. Leos however, want adventure and unlimited attention, meaning that the Taurus woman Leo man love compatibility duo couple will struggle. They will also encounter the problem surrounding their stubborn personalities.

In a relationship, both parties need to be able to solve a conflict efficiently to move forward, which is the ultimate thing this pair will struggle with. At the end of the day, some signs are just not made to match. Obviously, each couple is different, so there may well be some incredibly happy Taurus woman Leo man compatibility relationships. But in most cases, it will not be a success story. However, from this relationship, these signs will learn valuable lessons in being less stubborn, and opening up to suggestions and criticisms their future partners may have.