Taurus woman Aries man compatibility match could go either way; it has the potential to be great, but could also end in flames. Taurus women are incredibly seductive, and anything she does will make a man fall in love with her instantly. She likes a man who is straight with her, and won’t lead her on for months on end. She loves somebody who can provide her with the straightforwardness and devotion often seen in traditional relationships.

A Taurus woman likes to be taken care of and will take care of the Aries man partner in return. She is fond of offering her partner loyalty, affection, and will do lots of kind gestures to show her appreciation for him. She is very emotional beyond her hard exterior, so one must treat her with the utmost love and respect. If her trust is betrayed, it will almost never be gained back again. She will also have a fiery temper, and if crossed she will be a force to be reckoned with.

An Aries man is always up for a challenge, and will only date a woman who can provide him with these challenges. He is incredibly fast-paced and has a thirst for adventure, so any woman hoping to pursue a relationship with him will have to be open to taking part in his big ideas. An Aries man is often-times more interested in the thrill of the chase when attempting to find a partner, and can sometimes be quite inconsiderate of women.

Playing hard to get is the way to make an Aries man fall for you, and one should avoid throwing themselves at him. Aries men appear very confident and open to those around them, and project a positive vibe into their environment. They like to set goals, but don’t pay attention to the details and steps they must take to achieve them. Also, they like to take the lead, and value being looked up to by their partners. They are not particularly talented in long term relationships, usually opting for a short fling. However, when he is committed, he is loyal and will protect his partner.

The key to making this Taurus woman Aries man relationship work is compromise. Additionally, mutual understanding that neither person has to be the “winner” all of the time is necessary. Both Taurus woman Aries man sun signs are represented by animals with horns, which is fits them both perfectly. Both of these signs are used to using their horns to fight their battles instead of learning where they are wrong, and accepting that they may not always be correct. 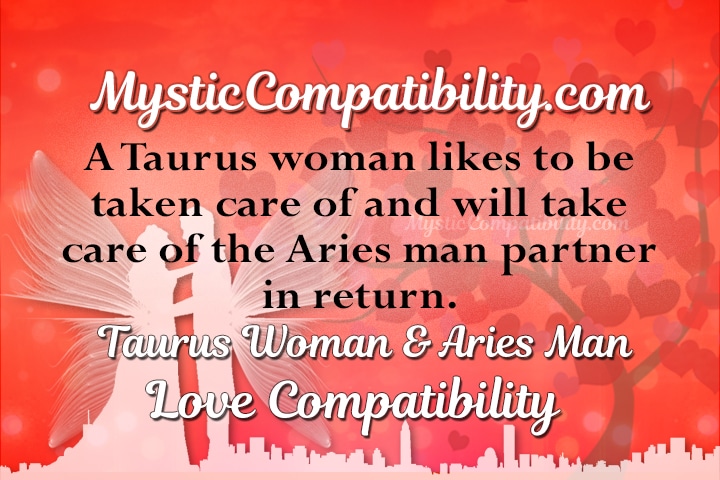 Sex is important to Taurus woman Aries man love match, and both strongly value pleasuring their partners to the best of their abilities. Aries men especially will compete with themselves each time they have sex to be better than last time, which will provide any woman with a good time. Taurus women love the all-round experience of sex, and orgasms don’t matter to them. They would prefer to have a sensual, passionate experience without achieving orgasm. This is because they are sexually charged by the quality of the sex itself. This matches well with Aries’ desire to please, and this could provide the basis for a sexual awakening for each of these signs.

Neither of these signs is unreliable or refuse to face a challenge, making a great bond between them. The Taurus woman Aries man soulmates will be able to trust each other easily as they are both open to working through any mishaps, and will both be completely honest with each other. Neither sign feels the need to lie to each other and will try hard not to jeopardize their bond. This is a rare thing to find in a Taurus woman Aries man zodiac match, as the signs are usually on different wavelengths when it comes to honesty. These two, however, will be incredibly open with each other, and won’t run away when challenges pop up.

Taurus woman Aries man in love strongly value stability and strength, with these being the pair’s core values. This will provide for lack of conflict during important decision making, and the pair will agree on key things within their lives together.

Aries men are unhappy when things don’t go their way. They love to be the leader and always consider themselves to be on the right. This becomes a problem when a stubborn Taurus woman comes into the mix. She will challenge him, and present relevant arguments, putting her Aries man in a difficult situation. He will become very defensive and argumentative, while the Taurus woman stands there silently.

It’s not that she hasn’t got anything to say, but she sees this outburst of emotion as immature and childish and doesn’t have time for it. This will annoy the Aries man even more, as his partner isn’t providing him with the satisfaction of a reaction. This could cause huge problems in the Taurus woman Aries man love compatibility, and drive a wedge between the pair over time.

Another flaw in this Taurus woman Aries man zodiac match is the difference in ways that these signs show affection. Taurus women prefer their loving gestures to be gentle and quiet and are not fond of huge announcements and ridiculous gestures. However, Aries men prefer exactly this. They like to be loud and obvious with the way that they show their love, which can make a Taurus woman feel uncomfortable. Likewise, the Aries man will feel unloved by his Taurus woman because of her subtle ways of showing her love.

Aries men are prone to feeling as if they should constantly be using energy. They love physical activity and are easily bored when forced to stay in one place for a long period. Taurus women, however, like to savor every moment and have no issues with staying in the same spot, taking in their surroundings and appreciating their environment.

This could bore an Aries man very easily, as he would much rather be exploring and finding new adventures than staring at the scenery. This could affect the Taurus woman Aries man love negatively, as Aries will soon become bored of his partner and Taurus will become impatient. Both of these signs need to find a mutual hobby that they can take part in together, otherwise, they may lose their bond.

It’s difficult to say whether this relationship would work or not, as there are equal pros to cons. Taurus woman Aries man star signs will struggle internally and have to face a lot of personal challenges to make this relationship work. They will need to change things about their personalities and develop a lot of patience, especially towards each other. There are some key differences in this Taurus woman Aries man horoscope match. Some include the basic temperaments and the reaction they would have to each other in certain situations. However, they have a strong sense of trust for each other. Moreover, they have the same core values, and both are open to a challenge provided by the other.

Taurus woman Aries man compatibility has the potential to work if these signs are willing to open themselves up and understand that it’s okay to be in the wrong. The key to this relationship is the ability to put aside differences, and grow alongside each other instead of opposing each other. These signs are used to using their “horns” and need to learn to agree to disagree. Aries men especially need to understand that they are not always correct. On the other hand, Taurus women should learn that ignoring the problem won’t solve anything.