In the Taurus woman Aquarius man compatibility, the couple would have a distinct lack of connection and will drive each other crazy. It is unlikely that they will be attracted to each other in the first place. They are on the opposite ends of the zodiac spectrum, and this will only end badly. A Taurus woman is known for being incredibly stubborn, and she will never waver from her ground. She will always hold her ownminimaland rarely give in to pressure from somebody else. She is an incredibly home-orientated person; as it is her preferred setting and most of her goals revolve around the home.

A Taurus woman aims for stability, which includes having a comfortable amount of money, a steady job, and a steady relationship. She needs a man who is straightforward, and won’t mess her around. Taurus woman is in for the long run, as she is incredibly dedicated and committed to her partner. She will take great care of her partner, and ensure he is emotionally and physically taken care of. She is talented at bringing all five senses into every sexual experience and is one of the most sensual people you will meet. However, when her trust is broken, it is unlikely that she will ever trust you again.

Aquarius men are particularly stimulated by intellect, and they strive to be intelligent people. They also love to stray from the crowd and follow their path in all walks of life. They will often be seen as the “odd one out,” due to their originality. Aquarius men are the least likely people to judge another human being, as they see odd quirks as good things, and encourage them. They believe that everybody is free to live their own lives as they want to, and refuse to stand in the way of that. They enjoy an adventure; boredom is their enemy. They are observant people, as they like to further deepen their understanding of humans and human behavior.

An Aquarius man needs an intelligent woman who can stir his intellect and challenge his views and opinions on things. He is very communicative and able to carry out long conversations with his partner. However, he may not be ready for a serious relationship, so he must be treated with caution. Any woman attempting to pursue an Aquarius man must be patient and give him time to settle down otherwise he will run.

Taurus woman Aquarius man in love will most likely drive each other insane. This is very little opportunity for the pair to find things in common, due to their basic lack of a connection. They will not want to be around each other, and things can only end badly for these two. 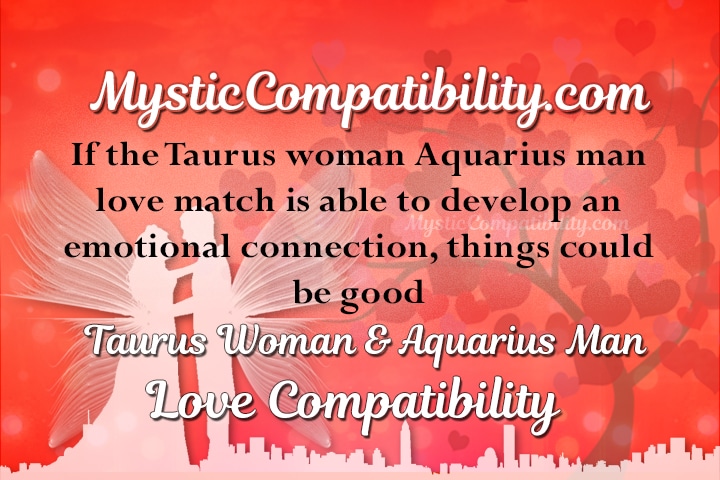 In most cases, the Taurus woman Aquarius man couple will not be attracted to each other at all. The Taurus woman will see the Aquarius man as reckless and unreliable, while the Aquarius man will see the Taurus woman as boring and nun-ish. In general, they are looking for very different things from a relationship, giving them very little chance of success. Taurus needs somebody stable and secure, while Aquarius needs to be able to spread his wings and leave at any moment. Although there is a slight potential for them to create a bond out of their differences, it is doubtful. Instead, the two will end up in arguments and will not be able to get along.

The Taurus woman will become incredibly annoyed by her partner easily. He will appear to her as a reckless person who only cares about his well-being, which does anything but provides her with the stability she needs. She will then develop a lack of trust for him because she believes that his free spirit will allow him to do whatever he wants without considering her. This may not be the case, but it is also has a high probability of happening. It is not that Aquarius doesn’t respect Taurus, but he doesn’t understand her needs, and can’t give them to her.

The Taurus woman Aquarius man sun signs have very different life goals. Thus this will be detrimental to their relationship. If a Taurus woman wants a countryside cottage, her Aquarius man wants a penthouse flat in a bustling city. They have very different tastes and will find it hard to agree on anything. Taurus woman Aquarius man soulmates aim for different things and have completely different priorities, which will make it very hard for the pair to stick together. One of the key things in any relationship is having a mutual goal that both people can work towards together, enabling them to grow and experience things together as soulmates.

The problem lies when a relationship contains two people with two different goals for their life, as it limits them as to what they can achieve together. It will stifle their personal development and put additional stress on both to conform instead of parting ways. This is the problem with this Taurus woman Aquarius man love. Both signs are incredibly different from each other and will find it very hard to allow themselves to do what they aim for.

In most cases, it is improbable that these Taurus woman Aquarius man zodiac signs will be attracted to each other in the first place. This is mainly due to their extreme lack of common interests, and their opposite personalities. Opposites attract, but not in this case. Both signs will find each other unbearable, and it will not end well for either of them. They also have a lack of similar interests, which will cause the pair to drift apart. The Taurus woman does not mind traveling to new places, but she would always like to return to her own home in the evening. The Aquarius man, however, likes to constantly be on the move, finding new opportunities. At the end of the day, these two have too many differences to make things successful.

The Taurus woman Aquarius man love compatibility match is not well suited in the slightest manner. This couple is destined for endless arguments, a lack of trust, and they will find each other unbearable. The end of this relationship will turn into a “winner/loser” situation, and neither will feel as if they have learned anything. This arrangement was destined to fail, unfortunately for both the Taurus woman and the Aquarius man.

Regardless, there have been few occasions where this match has ended in Taurus woman Aquarius man marriage, so do not lose all hope. If both are willing to change for each other, and compromise their goals, then this pair might work. It also depends on the specific individuals and the personalities they possess. The Taurus woman Aquarius man compatibility duo do not bring out the best in each other. In fact, they bring out the worst. The people surrounding them will see them as crabby and unhealthy, which is not what anybody wants their relationship to appear like.