The Cancer woman and Virgo man make a good match, and they complement each other nicely. In a Cancer woman Virgo man compatibility,  they have similar traits. However, their differences make them grow together as people.

The Cancer woman‘s zodiac animal represents her personality very well, perhaps more so than any other sign. She has a defensive shell that she uses to protect herself from the outside world. Possessing a hard exterior and soft interior, the Cancer woman is an emotional person when one gets to know her. She rarely allows her true emotions to show to people she doesn’t trust. Therefore, she usually appears quite tough in her first Cancer woman Virgo man dates.

The Cancer woman has some extreme issues when it comes to trust. As a result, she is not very good at opening herself up. She would usually rather keep old friends throughout her entire life rather than venture out and make new ones. This is an attempt to refrain from trusting new people, as it is something she struggles with.

In a Cancer woman Virgo man relationship, this need to put up a defensive barrier will become apparent. She may need a lot of time to feel comfortable with her partner. Many long conversations will be needed for her to feel relaxed, and it takes sometime for her to place her trust in him. However, once she has committed to somebody, she is incredibly loving and faithful.

Cancer is a very emotional sign. It is one of the key things to the Cancer woman’s personality. If she is shown lots of love and affection, she will be sure to return it. She is the master of non-verbal communication, often opting for actions and body language over communicating verbally.

The Virgo man is the perfectionist of the zodiac signs. Everything he does must be executed with a certain finesse. In fact, he tends to overthink things tremendously. Inside his brain, there is a constant stream of inner dialogue. As a result, he can overwhelm himself in ten minutes purely by thinking. Everything must be perfect for the Virgo man, including his Cancer woman Virgo man relationship. He may tend to pick out things in his partner and criticise her. This is not intended to be malicious- he purely wants her to be the best she can be and feels that he is helping her with this.

Additionally, the Virgo man is a very calm person, with a sensitive interior. He will treat his partner with the greatest respect, and see her as his equal. He will do anything in his power to make sure she is happy and adores her with all of his heart. Hiding behind a shell of emotion is another trait of the Virgo man. Therefore, he needs a woman who will stir his emotions, and make him feel special. Stability and sensibility are important things for a Virgo man, so he needs all of these qualities in a woman. A perfect relationship for him is the Cancer woman Virgo man love compatibility.

He may start out as quiet and reserved. But the right woman can open him up, and he will become a sensitive and loving partner. Boring is a word that could sometimes be used to describe a Virgo man. However,  he prefers to live simply. Adventurous goals are not his forte, and he would much rather live a simple life with the woman of his dreams than going jet-setting across the world to feel happy. A woman wanting to have a relationship with a Virgo man can be sure that it will be stable, loyal, and smooth-sailing.

When it comes to this Cancer woman Virgo man match, the pair has a perfect chance of working out. They share similar values, and they can understand each other on a deeper level. The Cancer woman and Virgo man bring out the best in each other and have every opportunity for success.

This pair is sure to be a success, as they both have an initial issue with opening up, yet both are deeply emotional. Their Cancer woman Virgo man sexual bond will be strong because of their underlying emotional connection with each other. This pair understands each other well and know what the other needs. The Cancer woman and Virgo man both have similar needs when it comes to sex, so they will be able to give each other the key things for both to receive maximum pleasure.

When it comes to Cancer woman Virgo man trust, this pair is perfect together. They share the same trust issues that are often looked down upon by other signs, so they can recognize when the other is feeling uncomfortable. Overall, this couple does not need to mistrust each other. The Cancer woman can penetrate the Virgo man’s emotional core and bring out his emotional side, and this will make him trust her. 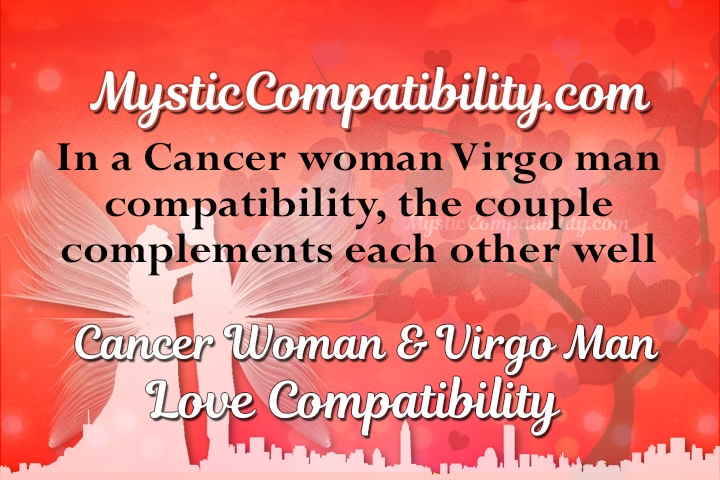 Although the Cancer woman’s quiet nature can sometimes be a problem, it also gives the Virgo man to express everything that goes on in his head. He is finally able to speak out loud and set his thoughts free, and the Cancer woman will listen attentively. The Cancer woman Virgo man will understand each other on a deeper level. Furthermore, both will be able to converse in a variety of ways.

This pair complements each other well because of their similarities and differences in values. The Cancer woman sees emotion as something essential and keeps it in mind with every decision she makes. The Virgo man bases everything he does upon rationality, and this will compliment the Cancer woman nicely. Their shared Cancer woman Virgo man goals will be well thought out and balanced because of both signs views.

The Cancer woman Virgo man zodiac signs also have many things in common. As a result, there is no end to activities they could do together. Even if they cannot find anything, they are both independent people able to go their ways while maintaining that close relationship. Being independent is important in a relationship because it allows both people to follow their journeys in life without feeling like their entire being revolves around their partner.

One slight issue that the Cancer woman Virgo man in love could run into stems from the Cancer woman’s quiet nature. This could make the Virgo man feel uneasy and alone with his thoughts. He already tends to overthink things and get trapped in his head, so this could only worsen that.

In a Cancer woman Virgo man marriage, the Virgo man may struggle to get in touch with his emotions. This could become a turn-off for the Cancer woman. He is usually too guarded to let his true emotions show, and this can be incredibly irritating to anybody who wants to develop an emotional connection with him. Especially when he tries to analyze these emotions, the Cancer woman will become increasingly annoyed with him for this lack of emotion. Analysing emotion is seen as something disastrous by the Cancer woman. She believes that emotions should only be felt and moved on from.

In conclusion, the Cancer woman Virgo man love compatibility is a perfect match. It is built on a foundation of trust and communication. When this pair is in love, they will be complete inseparable, unable to stray from each other.

Neither will feel the need to betray the other’s trust, and they have a strong understanding of each other. In a Cancer woman Virgo man compatibility, the couple compliments each other well. Furthermore, they tend to bring out the best in each other.