The Cancer woman and Taurus man have the highest potential to be a great couple. They share similar values and offer complementary perspectives on many things in life. In a Cancer woman Taurus man compatibility, both are identical people, but different in the right ways.

The Cancer woman is known for her similarity to her zodiac sign, the crab. She possesses a protective shell, which she uses to guard her true fragile self. Cancer women are incredibly emotional people beneath her cool outer shell and hide it well. Underneath the surface, she is a fragile person and doesn’t take well to criticism. She tends to sulk when faced with critical analysis, and may give her oppose the “silent treatment.” Sensitivity is a key trait of any Cancer woman. Seemingly, she will need a man who can provide her with some stability in her life. On a Cancer woman Taurus man date, she will not show him her emotional side straight away. However, once it has been unleashed, it is hard to reign back in.

The Cancer woman can be very docile, and she enjoys staying at home and leading a quiet life. Not one for crazy adventures, the Cancer woman would much rather stay at home with her partner and cuddle in bed. It is also a well-known fact that Cancer women have extreme trust issues. When it comes to making new friends, it is unlikely that a Cancer woman will put herself out of her circle of friends and branch out. She likes to stay in the same bubble her entire life. For her, it is easier to hang onto the same people than to learn to trust somebody new.

This translates into her Cancer woman Taurus man relationship too. She may not be comfortable with a new man initially, and she almost definitely will not trust him for a significant amount of time. However, once she has adjusted to his company, she will learn to open up to him and develop a deep emotional connection. Her emotional personality needs some sense of stability and support, so she needs a man who will not betray her trust, and who can help her strike a better balance when it comes to her emotions.

Overall, the Cancer woman is a very passionate person, and she deeply values intimacy. She may not be adventurous when it comes to sex. But, she will certainly ensure that her partner feels loved and cared for. Intimacy is a key element of a Cancer woman Taurus man sexual relationship. Unfortunately, she can sometimes appear to be asexual. This is based on her lack of trust, so when she feels truly close to somebody, she will allow them to experience what she has to offer in the bedroom.

The Taurus man is old fashioned and loves to be considered the man of the house. He is stable and secure, knows his path in life, and strongly values his ability to provide for his family. Being financially secure is important to him, as is stability in almost every other way. He aims to have a loyal wife, children, a nice house, and a secure job. The main priority of a Taurus man when in a Cancer woman Taurus man marriage is security.

Any woman wanting to pursue a relationship with a Taurus man should allow herself to be satisfied with the simple things in life. He does not enjoy having big plans and ambitious goals. The Taurus man enjoys a home-cooked meal in front of the television. He is a family man and values his Cancer woman Taurus man home more than anything (barring his partner).

Sensuality is the key thing when it comes to dating a Taurus man. He sees the five senses as the most important things when it comes to the bedroom. Furthermore, he will always endeavor to make sure that his partner feels maximum pleasure at any given time. Adventure may not be his forte. But, he is willing to try anything, so long as it adheres to his love of sensuality.

The Cancer woman and Taurus man share an emotional connection to be rivaled. They both have similar views on many things, but differences in perspective- which complements each other nicely. This Cancer woman Taurus man couple brings out the best in each other. Also, they truly unleash each other’s passionate side.

Many people mistake these Cancer woman Taurus man zodiac signs as being utterly asexual with each other. This is based on the assumption that neither is particularly interested in casual, impulsive sex. This is not the case, and this pair can have many fantastic sexual experiences.

This pair both value their emotional connections with their partner. Hence, this will give them the foundation for loving and passionate Cancer woman Taurus man sex. The Taurus man will ensure his Cancer woman is receiving the most pleasure she possibly can, while the Cancer woman injects emotion into the situation. This will result in a highly pleasurable and emotionally charged sexual experience that will be rivaled by those around them.

The Cancer woman is known for her intuitive nature, and so is the Taurus man. Neither Cancer woman Taurus man in love will feel the need to lie to each other, as it would be completely pointless. They both see each other as equals, and will not abuse their mutual trust for each other. It is rare that they will seek anything from a third party because they can provide each other with what they need in almost every situation. This pair’s emotional connection will lead them to have a strong sense of trust for each other, despite the Cancer woman’s important issues in this field. 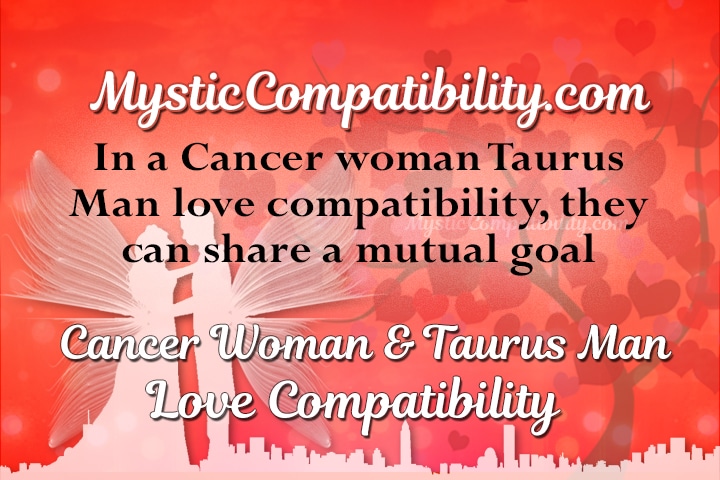 This couple will also have plenty to talk to each other about because they share very similar goals and dreams. Both enjoy having a stable home and family unit, so they can talk about almost anything without making the other feel inadequate. In a Cancer woman Taurus Man love compatibility, they can share a mutual goal. This is quite important in a relationship. A mutual goal provides a pathway for the couple to grow together as people, and support each other along the way. The Cancer woman and Taurus man can focus their efforts on creating a stable home for the pair to share, and this will keep them close in the long run.

Each of these signs sees their mutual goal from a different perspective. The Taurus man sees the material side of a stable life, aiming to have the ultimate comfort to feel happy. The Cancer woman Taurus Man in love enjoy having possessions that will make them happier, and their conveniences are key. For the Cancer woman, she sees the goal as emotional stability. On the other hand, the Taurus man works on having a stable house with all of the life’s conveniences. The Cancer woman can work on keeping emotional stability within the household. The Cancer woman Taurus man compatibility compliments each other nicely. The fact that they can concentrate on both aspects of stability makes for an excellent result.

One problem that this Cancer woman Taurus Man pair may run into is the fact that the Taurus man can be very stubborn. When faced with confrontation, he usually refuses to communicate, valuing his own opinion more than his opposer’s. Combined with the Cancer woman’s tendency to sulk, this could cause a communication barrier that will be hard to hurdle.

The pair may tend to completely ignore each other and refuse to speak when they have argued which will make issues difficult to resolve. The Cancer woman Taurus Man couple should not cut each other off when they are not happy. Instead, attempt to talk things out and resolve issues ASAP.

This pair has every potential to work out well, and are very well suited. They bring out the best in each other and compliment each other’s traits. They share a mutual goal of stability and can keep up with each other’s pace without getting bored. The Cancer woman Taurus Man compatibility could be a perfect match.