The Cancer woman Cancer man compatibility is tricky. This pair complements each other well in many aspects, but they lack a certain spark needed to keep a relationship alive.

The Cancer woman is perhaps the most guarded of all the signs. Hiding behind an outer defensive shell seems to be her default, and her sensitive interior is not something that many people will often see. Maybe the most similar sign to their zodiac animal, the crab, the Cancer woman has a metaphorical shell which appears to be cool and collected. Behind this lies her true self, a very fragile and needy woman. This is not a negative thing, as she possesses these traits in measured doses. She needs a man who can provide her with stability when she isn’t able to give it to herself, and she needs a shoulder to cry on. Emotions are key to a Cancer woman. So, she needs to have a strong emotional connection to the Cancer woman Cancer man relationship.

The Cancer woman is prone to having a lot of trust issues, and this is one thing she is known for. Her tendencies to avoid trusting people can extend to refusing to meet new people so that she won’t have to trust anybody new. She would much rather cling to old friendships (even if they have previously betrayed her trust) in a desperate attempt to avoid opening up to a new Cancer woman Cancer man dating.

This reflects on her Cancer woman Cancer man relationships too. She may take a long time to become accustomed to having somebody as close as a partner, and it could take her a while to fully open up. This is due to a fear of her trust being betrayed. If a man can break past this initial trust battle, she will be incredibly nurturing and caring towards him, as she has an almost mother-like way of showing affection. She is a highly sensual person and will always find a way to incorporate emotion into her sexual encounters. Therefore, grounding those who may lack in this certain finesse.

The Cancer man, much like his female counterpart, is much like his zodiac sign. All Cancer’s possess a certain defense mechanism against the world. They try their best not to get hurt because of their fragile nature. He needs somebody who can offer him the same emotional connection needed to open up and release his inner self.

Being a conversational person is also a trait of the Cancer man. He loves adventure but seeks comfort, and has a cool exterior while hiding a sensitivity interior. A Cancer man is the most sensitive of the zodiac men. As a result, he requires a certain type of support, much like that of a mother. He is not one to make the first move. Any woman pursuing a relationship with him should not hold her breath for him. She should attempt to make the first step for Cancer woman Cancer man love compatibility. Seemingly, he is far too shy, and the pair will be waiting around forever.

Once he is committed to a woman, he is committed to the Cancer woman Cancer man marriage. Furthermore, he will do his best to ensure she is treated like a queen. Equally, he will make sure that his partner is well taken care of. Nobody who dates a Cancer man will ever have her needs go unfulfilled. He will have a possessiveness rivaled by no other because he is afraid his woman may betray his fragile sense of trust. Overall he is a very loving partner and will do anything in his power to keep his partner happy.

This Cancer woman Cancer man compatibility has the potential to become stagnant. This is because both signs can be quite docile when it comes to keeping the spark alive. If they successfully manage to find ways to keep that excitement, they are an incredibly good match.

Over time, these Cancer woman Cancer man soulmates will learn to trust each other with all of their hearts. There is absolutely no reason for this pair to have any trust issues. They are both very well grounded and are completely satisfied with each other. The Cancer man has no desire to give up this emotional stability that his female counterpart can provide him. They offer each other a lot when it comes to trust, and this openness will allow them to have a strong emotional bond.

This pair is also incredibly good at communication- more so than most zodiac matches. Specialising in non-verbal communication, this pair seems to know exactly what the other is thinking and feeling at any time, perhaps because of their similar natures. The Cancer woman Cancer man partners like to be by each other’s sign, even in silence. Furthermore, they value their ability to say a thousand words to each other via a glance. If there is anything to be marveled at for this pair, it is their deep understanding of how the other thinks and sees the world. 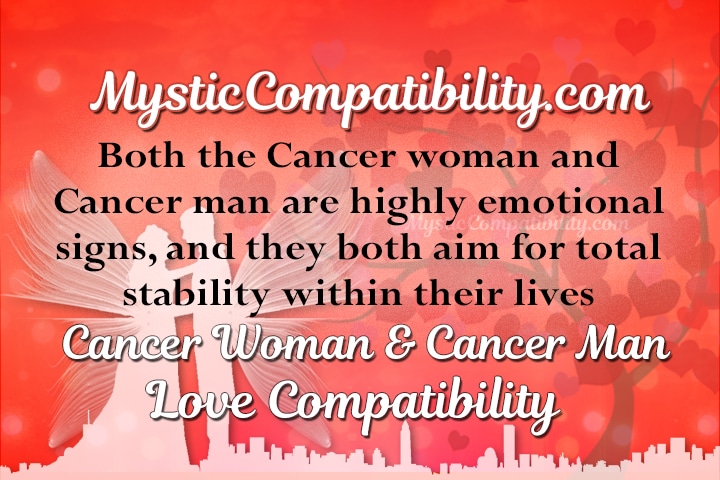 When it comes to Cancer woman Cancer man sex, this pair will be highly sensual. Their emotional connection provides a great basis for their sex life. The Cancer man and Cancer woman both need to talk extensively about things before they act upon them, including sex. Overall this pair understands each other’s needs and physical desires, especially due to their knack for reading each other, so neither will ever go unsatisfied.

They also share the same values- stability and emotions. Both the Cancer woman and Cancer man are highly emotional signs, and they both aim for total stability within their lives. A mutual goal is important in a relationship as it provides an opportunity for the couple to grow together as people. This means that the Cancer woman Cancer man shared values is an excellent thing. It may be the thing that keeps them going in the long run.

The main problem that arises when two Cancers embark on a relationship with each other is the lack of aggression and forwardness. In every relationship, there must be an initiator, and in this relationship, there isn’t one. Whether it be sex or even the whole relationship in general. This Cancer woman Cancer man couple will struggle to spark up the courage to make the first move. So, they may be stuck in limbo for a little while. Sex may hardly occur when this couple gets together because neither are sexually aggressive enough to initiate it and enforce its regularity.

This will also result in the relationship as a whole becoming stagnant. Both the Cancer woman Cancer man become complacent towards each other. Without an influencer who can inject a bit of excitement and surprise into this couple, they will suffer. The spark will be gone, and this pair will fall out of love as quickly as they fell in. They may struggle for activities to do together as they both run out of suggestions, and this will make them incredibly bored of each other. They may end up just sitting around the house on a day to day basis ignoring each other, which is obviously not good.

The Cancer woman Cancer man lovers may struggle to find activities to do together. This is because they both run out of suggestions, and this will make them incredibly bored of each other. They may end up just sitting around the house on a day to day basis ignoring each other. This is not good for their relationship.

The majority of the time, this Cancer woman Cancer man compatibility is a good one. In conclusion, many happy couples emerge from this zodiac match.