The Scorpio man Scorpio woman compatibility duo is full of abundant deep emotions. Emotionally, they can ensure that the other is completely fulfilled. A mystery will surround them which is what draws them to each other. When they connect, they will want to continually keep coming back for more. Whether they agree on who will lead their relationship and who will back down should be decided to ensure they can make a success of things.

Initially, they will be wary to start a relationship and it will take some time for them to connect. There is the possibility of breaking each other’ heart here. Reciprocally, they will be unsure if they actually want to take the risk of getting involved. When they do decide to take the chance, their Scorpio man Scorpio woman love compatibility will be a very private affair.

Neither of them is inclined to take part in casual relationships. Their connection will either be intensely good or terribly bad. They are equally determined which they will utilize to either build or break their relationship. Love and achievement are very much a part of what this couple can set out to do. They are able to identify with each other on a completely reciprocal level. Manipulation is the name of the game for them. They equally will hold back from trying to fix things once they have had an argument. To forgive does not come naturally to either of them and forgetting is just not part of their makeup.

The Scorpio man and Scorpio woman have numerous things in common that can result in them fulfilling the needs of each other within their relationship. Scorpio man Scorpio woman friendship will be based on admiration and complete trust for the lovers. They will relish in the environment that they are able to create within the confines of a friendship. Imagining how much better things will be when they move into relationship status. They would need to realize that backing down during an argument is a sure way to keep their relationship successful.

Others will never truly understand what is going on with the Scorpio man Scorpio woman in love. What is actually happening is a highly tempestuous and passionate connection. Their mutual propensities for sulks and emotional temper tantrums will result in a domino effect of back and forth angry responses. Neither of them will be very open about what they feeling. This could potentially lead to misunderstandings and resentment between them.

Scorpio man Scorpio woman love compatibility will be instinctively strong. The potential intensity between them might well be what destroys them. Their compatibility could possibly not go the distance if they do not agree to compromise on their similarities. They have the potential to create a loving relationship. That is of course if they do not let their emotions get the better of them in front of their friends. She will be humiliated and in tears and his fiery disposition will be very unforgiving of her weakness.

Passion for them will be intense and they have the tendency to go the distance for each other. Romance will be immense for the Scorpio man Scorpio woman love match. Mutually they understand that this implies action within their relationship. Once they agree that they want to initiate a relationship, passion will soon follow.

Additionally, Scorpio man Scorpio woman sex would pave way for an interesting combination. Their similar personalities give them the upper hand for what works for the other. They will try their best to understand how to please each other, and will not hold back from doing so. There is an added intuition that guides them in avoiding doing things that they know the other would not appreciate. Their perception will cause them to be able to fulfill each other’s sexual needs completely.

Scorpio man Scorpio woman marriage will have the possibility to be tremendous. They will both want to contribute to the intimacy within their union and will work hard doing so. Where they will have marriage problems is in deciding who will take the lead in their family choices. When they are able to share the responsibilities there will be a mutual feeling of control and then their relationship will work much better for them. 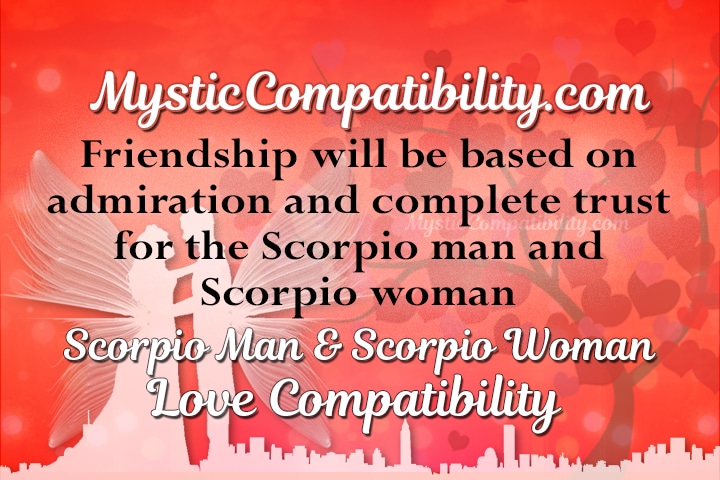 In the Scorpio man Scorpio woman relationship, they are mutually intuitive which will result in a deep understanding of each other. Emotionally they will connect on a similar level. The sensitive Scorpio man is a real homebody and will avoid being out on the town with friends every night. She will align with him and want to be part of his safe haven that he will want to create. Together they will fashion a life that pleases both of them.

They will easily be able to talk to each other and won’t often have to speak to understand what is going on. Just glancing into each other’s eyes will reveal what the other is experiencing. They will support each other when they are having a bad day. Understanding what needs to be said or done to make the other feel better.

Scorpio man Scorpio woman in love are mutually stubborn. Their pride won’t permit either of them to back down from an argument, always wanting to get the last word in. If they do not compromise with each other and sometimes agree to give in, their relationship will be doomed from the start.

They are mutually domineering and will always want to be in control of every situation. Their possessiveness will result in distrust and paranoia. The Scorpio man Scorpio woman mutual fiery dispositions will come to the fore more times than they would like. It will be especially bad when they argue in front of friends or family.

When the Scorpio man wants to attract the Scorpio woman, he will need to be less subtle in his method of engagement. When they end up at the same party, he will need to try and make eye contact. Once she shows a sign of interest, he should not hesitate to approach her directly. He should keep the conversation light, and if she is interested, she will respond in kind.

For Scorpio man Scorpio woman dating each other to flourish, she should remain as subtle as is possible. He might have noticed her first, but if not she should try and catch his eye. Should he be interested, he will definitely make his way over to her. If she is able to display a bit of coyness, he will be animated by her response and drawn to her. She should try and meet him half way and display her loyalty and trustworthiness to get his complete attention.

Scorpio man Scorpio woman compatibility is over when neither of them wants to relinquish control and let the other take the lead in any avenue of their relationship. They will try and get the other to concede, but neither will easily do so. It can result in heated arguments between two very emotional and passionate individuals. When they decide to turn their back on each other, they will never truly let go of what they once were.