The Pisces man Aquarius woman compatibility is straight away. With her seemingly aloof personality and his sensitive nature, they connect on a transcendent level. She is unafraid to approach him once she spots him standing to one side. He is reviewing the group seeing who catches his attention. This couple can create a real positive and successful connection. Mutually, they have a shared compassion for people that they interact with.

The Aquarius woman can be quite emotional and is standoffish by nature. Her perceived unemotional stance is largely due to her humanitarian outlook. The decorous Pisces man is far more restrained when likened to her outgoing nature.

His abstract look on life will stimulate her analytical viewpoint. With his intuitive nature, they will connect on a really comfortable and hassle-free level. She has an unconventional ability to trust her intuition through the tender direction of her confident and thoughtful Pisces man.

Mutually the Pisces man Aquarius woman couple will be in agreement that it is far better to focus on reality than wishful thinking. This will result in them not arguing over petty things, but enjoying discussion to resolve things. They enjoy the thought of anticipation, looking forward to but unsure what is going to happen next.

The Pisces man is very supporting of his Aquarius woman, even though she can be susceptible at times. He is a good and attentive listener, and when she needs to share her problems, he won’t hesitate to be there for her. She will feel safe within the confines of their relationship, which results in a good connection between them.

This is a one of a kind Pisces man Aquarius woman relationship. She is an avid socializer and might not commit even to him. He, on the other hand, wants to be taken care of and will need her to commit for him to feel secure.

He will find her slightly aloof when she is off making new friends, feeling excluded from her attentiveness. Their group of friends will need to entertain him until she returns to spend some time together again.

The romance between the Pisces man and the Aquarius woman will be incredibly wistful. They are able to find far-reaching fulfillment with each other. He will acquire some restraint regarding his insecurities with her.

She will also help him to learn to control his possessiveness. He has an intense need to be loved and be able to give his love to someone. With his very open and considerate nature, he needs to be careful that she does not break his heart.

The Pisces man Aquarius woman love compatibility is almost a psychologically rudimentary association. Mutually, they will derive great benefit from being in a relationship together. She can categorically find her principled side when she permits herself to open up to him. He certainly knows how to charm her. This develops their compatibility in some amazing ways.

Passion for the Pisces man Aquarius woman is a little too intangible to amount to anything. He will easily be attracted to her and excitement between them will be epic. She will melt under his touch, and he will not hold back from pleasing her in most imaginative ways.

The Pisces man Aquarius woman sex will certainly be interesting and unexpected. There is an amazing bond between them which makes for an exciting sex life. They will use their love making as a communication stream. 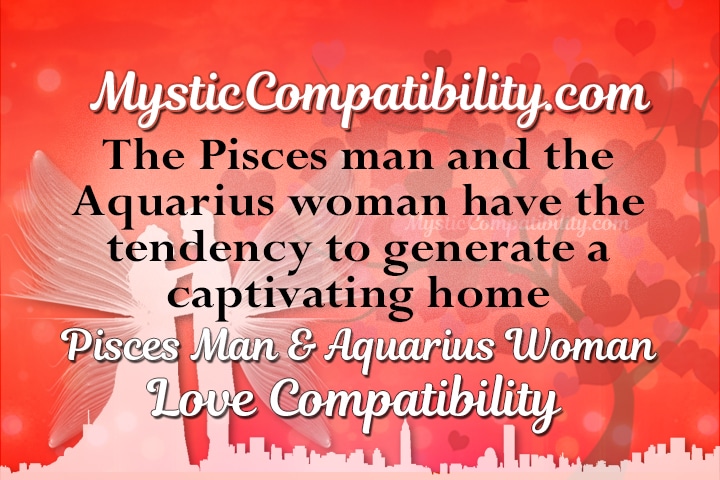 He is more on an emotional level, whilst she is more on a cerebral vein. The Pisces man Aquarius woman soulmates will not be afraid to try new things to spice things up. Role play is not something that either of them will be averse to. Her sensual nature and his need for love will result in a very happy couple.

The Pisces man Aquarius woman marriage will work exceptionally well. They tend to generate a captivating home.They have a predisposition to custom a wistful and imaginative life together. With their very similar outlooks, they and will ensure a spontaneous and nurturing lifestyle. She will need to be patient when his cool exterior is marred by a seemingly unprovoked energetic outburst. She will love him unconditionally.

The Pisces man Aquarius woman in love are very much on the same wavelength. Whilst her intuition helps her to understand his needs, he will not hold back from showering her with unusual gesticulations of love. They share a loyalty beyond imagination. Whatever this couple has to deal with, they will work really hard to make this relationship work.

Philosophically his inventive ideas and her easy going nature will carry them beyond their own abilities.The Aquarius woman will want to make decisions without her. The Pisces man won’t really object because she doesn’t really care about dominance.

He has a relaxed approach towards life and thoughtful. He remains submerged in his own thoughts most of the time. At times he may get diverted from reality. These are times that he may inadvertently hurt her.

The Pisces man dating Aquarius woman will be drawn by his loyalty and seriousness. The Aquarian man will never cheat on the Pisces man.

The Pisces man, Aquarius woman lovebirds, are sadly not the most practical individuals. The Pisces man is dreamy in her outlook, and he is pedantic in his need for detail. One of their major problems arises when they need to take care of household responsibilities. He will have a future financial plan while forgetting to pay the everyday expenses.

When tension arises, the Aquarius woman can be overbearing in his arguments. The Pisces man prefers not to get involved in the detail. She will withdraw and return when she thinks things have calmed down sufficiently. This relationship can only work if she learns to stand up for herself. He will also have to try and hold back from offending her sensitive manner.

The Pisces man needs unconditional love and attention. The Aquarius woman can be unpromising when it comes to commitments. She will want to bond with him, and that might not be where he wants to be. The Pisces man can be apprehensive and nervous. Her possessive nature will result in her wanting him to be with her all the time. He can become uncomfortable, and many disputes will arise.

When an Aquarius woman tries to attract the Pisces man, he can bring out all the romantic stops. He should woo her with all his might. Allowing her to exhibit a more confident response to decisions that need to be made will keep her entertained. He merely has to give her some good company by not holding back on how he feels.Mutually they have an unusual, uncommon and sometimes morbid way of looking at things.

When a Pisces man wants to get the attention of the Aquarius woman, she should reveal a more cerebral and liberating outlook. She can be supportive in his need for control, and he will feel more like a man in her presence.

The Pisces man Aquarius woman compatibility relationship is over when the Aquarius woman becomes too distant. Respect will become an issue if he is not assertive enough to her sweet persona.