She is looking for a casual relationship, and he would prefer a long term commitment. Although the Pisces man Sagittarius woman are attracted to each other, their combination is tricky and won’t live up to its expectations. His ability to have interesting conversations will at first draw her; thereafter she could become bored by them.

Socialising is not top of the agenda for the somewhat shy Pisces man. The outgoing Sagittarius woman loves socializing. The chances of this couple meeting up are diminished unless they end up in the same gathering.

What will draw the Pisces man Sagittarius woman couple to each other is the air of mystery that surrounds him, and the inquisitive nature that she has. Her relaxed and happy-go-lucky outlook will immediately get his attention. The Sagittarius woman’s ability to make things happen with ease is enchanting for the Pisces man.

The Sagittarius woman finds it difficult to sit still for very long. At times she can become quite restless, and the Pisces man will wrestle with her need to keep on the move. He is the epitome of stability, and the Sagittarius woman’s extroverted behavior will disarm him.

On the other hand, he is the introverted persona, and she will become frustrated when he does not communicate about his feelings. His seemingly evasive behavior will become a concern for her and the Pisces man Sagittarius woman relationship will start to disentangle.

The Pisces man Sagittarius woman love compatibility will be unsuccessful wholly on an emotional level. Due to their enduring personalities, this couple will try and make it work. They could potentially use their successful sex life to justify staying together. Sadly all this relationship does is to highlight how different they actually are. They cannot go the distance; no matter how long they hold on or try to make things work.

Passion from a sexual point of view is not something that the Pisces man Sagittarius woman in love will have the privilege of enjoying. Mutually they love life to the completely and utterly. Potentially the love they share could eventually generate some passion between them.

Romance is not something that the Sagittarius woman wants to expend energy on, whilst the Pisces man will want to go the courtship and wooing route. As time goes by, if they manage to stay together, she will begin to enjoy his romantic gestures. Potentially she could start to reciprocate his need for a lifelong partner.

He will, in turn, ensure that she is pleasured in ways that she has not thought of before. She will bring new ideas to an otherwise mundane love making. Together this couple is able to enjoy a very satisfying and imaginative sex life.

The Pisces man Sagittarius woman marriage could be a disaster. She is definitely not the marrying kind, whilst he is the looking for a lifelong commitment. The everyday responsibilities are what will break them. That is unless they are able to communicate and compromise to agree on a platform that works equally for them.

Emotionally the Pisces man Sagittarius woman in love are able to balance each other out. Deep down they mutually want the same thing, a loving and secure relationship. Her sentimentality and his depth of emotions will bind them to each other. When they are able to compromise and meet each other half way, this relationship can go the distance.

When it comes to loving your partner, the Pisces man and Sagittarius set the bar really high. His naturally calming personality will not be the dominant one in their relationship. Whilst she can be a little manipulative which won’t perturb him in any way. She has a natural cherishing and shielding personality that will embrace him and all his issues. 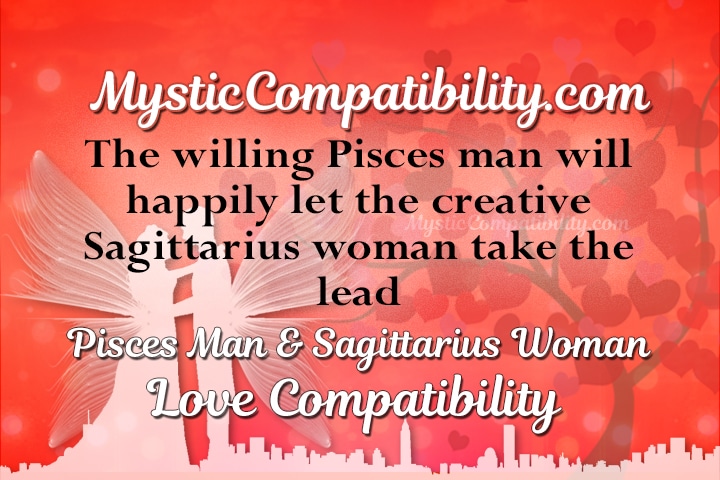 Mutually the Pisces man Sagittarius woman soulmates value freedom and neither is possessive by nature. He desires a great deal of emotional support, which is not something she is at ease with. When she senses that their relationship is restraining her, she will simply ensure that she is not around to be directed by him. Sadly their union becomes a vicious circle of the absence of sentimental support until there is nothing left to save.

The Pisces man will find the Sagittarius woman to be somewhat unfaithful at times. She won’t intentionally set out to hurt him, but it will nonetheless. He will start to withdraw, and she will become frustrated by his lack of involvement. The emotional Pisces man may just be too much for the flighty Sagittarius woman. She will not hold back if she feels he is putting her in a corner. This will be the beginning of the end for them.

Neither the Pisces man nor the Sagittarius woman will want to give up on who they are. She will continue to want to do her own thing, and he will want a stay-at-home wife that takes care of him. This is a relationship that should not have developed into a marriage, and if it does, it could end in disaster. Should they decide to have a casual relationship, it would be far better for them to do so.

When the Pisces man wants to get the attention of a Sagittarius woman, he will need to come across as less emotional. She loves life and adventure, and he will have to dig deep to find those energies to engage with her. They have the ability to create some fun times, but he will need to console himself that this will be a short lived engagement.

When the Sagittarius woman wants to attract a Pisces man, she can attempt to lift his spirits. When he sees her love of life, he will be drawn to her. To keep him engaged, she will need to put away her wandering spirit until she has him hooked. He will become insecure if he realizes at the beginning of their engagement what a free spirit she is.

The Pisces man Sagittarius woman compatibility ends when their glaring differences results in continuous disagreements and refusal to compromise. This break up will not be a pleasant one, as each throws their personality traits at each other in defense of themselves.