The Pisces man Taurus woman compatibility will be really special and have a lot of sensuality for them. Together, they are mutually patient, gentle and kind individuals that will go the ends of the earth for their partner. There is a propensity of having a natural desire to take care of one another which goes far in any relationship. Their friends will probably introduce them to each other. It won’t take much for them to become interested in one another.

When they start to talk to each other, she will discover that the Pisces man has boundless common sense and insight.The Taurus woman likes to ensure the best outcome and will be happy to have found a partner to think out the details.

She will rely heavily on him when taking her time to decide on a matter. Equally, they are not in a hurry to make any life altering resolutions. They will make really good friends, which is a wonderful platform to build a Pisces man Taurus woman relationship on.

The strong Taurus woman’s strength and down to earth persona is responsible for the overwhelmed Pisces man feeling loved and secure within their entanglement. His emotional flare-ups won’t unhinge her, as she is calm and able to see through his fears. She realizes that she is more stable within herself and does not expect him to meet her on the same level.

Her patience allows her to not become irritated by his sometimes unstable fears and thoughts. In return, she will find that the inspiration Pisces man will fuel her ambitions. With his deep thinking and slow response to action, he will think of scenarios that she might never have done so.

With his compassionate nature, she will find that he will never be unfaithful. The Taurus woman is ambitious, and the Pisces man always has a lot of ideas that he wants to get off the ground. They will be happy to support one another in all endeavors that they disembark on.

The Pisces man Taurus woman love compatibility results out of the dependability they have with each other. They will generally take their time in getting to know each other before they decide to commit.

When the Taurus woman decides to reveal the love and respect she has for the Pisces man, this relationship will go the distance. He will feel comfortable in the thought that her loyalty is dedicated to him. They will discover a Pisces man Taurus woman sexual chemistry that will bind their compatibility for many years to come.

The Pisces man dating Taurus man is known to be quite intuitive. They will create a connection that wholly completes them. The Taurus woman lavishes idealistic gestures, and he will retort with bountiful quantities of affection and commitment for her.

Their mutual romantic outlook will result in many hours of intimacy to ensure the other is completely satisfied and spoilt. The Pisces man and Taurus woman relationship will potentially not falter, but successfully continue to be stimulating and alive as at the beginning.

The Pisces man Taurus woman sex will be a mutual satisfying of each other’s needs. They will take their time and savor each moment together. Before taking things to the bedroom, they will ensure the setting is perfectly sensual and romantic. 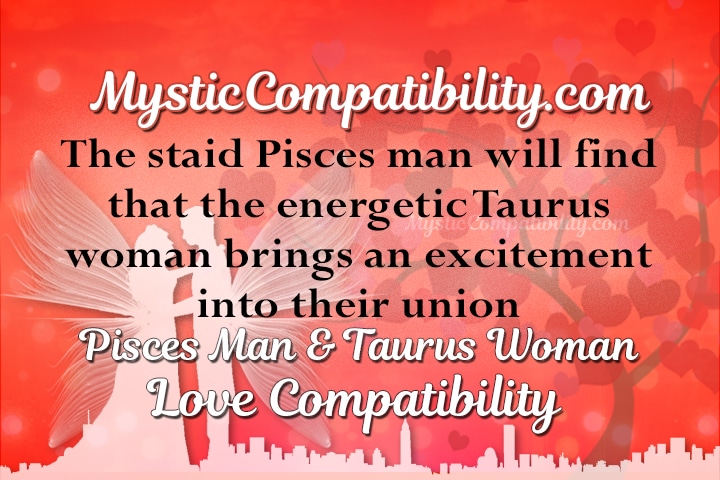 The Pisces man Taurus woman marriage will be easy-going and delightful. The staid Pisces man will find that the energetic Taurus woman brings excitement into their union. Once this couple commits to each other, neither of them will be unfaithful.

The Pisces man Taurus woman soulmates will create a beautiful home to raise any children they may decide to have together. Financially, she will need to encourage him to stay at his job continuously. That is if she is not career orientated and out earning her own money. She will need to be the disciplinarian for their children, which he won’t mind at all.

The Pisces man dating Taurus woman is looking for stability in his life.The strong Taurus woman will not hold back from confidently taking on the role of benefactor. They are equally honest and willing to support each other.

Mutually, they look at their home as a refuge from the world. They would rather stay home for a wonderfully romantic and relaxing evening with each other than be out socializing.

What works really well for the Pisces man Taurus woman couple is their need for a relationship to development slowly. Equally, they are more comfortable to take their time to commit to anything. In fact, the Pisces man becomes apprehensive when things move along too hastily. Goes to the Taurus woman as well.

The Taurus woman is known to be quite grounded and rational. On the other hand, the Pisces man often lives in a fantasy world, whilst she does not have time for frolicsome philosophies. He can be very sensitive, and with her practical outlook, she won’t always understand that he is hurt by her reactions. This is where things start to unravel and could lead to a breakup.

The Pisces man Taurus woman might find themselves simply going through the motions. They will want to get as much out of the relationship that they can. This does not mean that it is sustainable or can survive long term. There is just too much compromise between them that it could become more comfortable than an exciting interchange.

When the Pisces man wants to get the attention of a Taurus woman, he will have to put himself out there. She loves to be helpful, so if he asks her assistance on something that could be a good start to something wonderful. Once he gets her attention, he will find that they have a lot in common which will bind them to each other perfectly.

When a Taurus woman wants to attract a Pisces man, she can ensure not to come across as too emotional. They will find a balance for their applied natures, and this will bind them to each other. When he has sight of her protective nature, he will want her to be in his life. He will make the perfect partner and should she get his attention; she should do whatever it takes to keep him.

The Pisces man Taurus woman compatibility is over when the world comes to an end. This couple will be together for life unless something drastic happens to end them. They will not get over each other very easily. Should they have children, they will be happy to be part of each other’s lives years to come.