The Pisces man Scorpio woman compatibility is overwhelmingly profound and responsive. The mysterious Scorpio woman will be in the center of the room and intrigued by his subdued personality. Whilst the introverted Pisces man is standing on the side watching and drawn to her dark persona.

She will find his obvious need for avoidance to being the center of attention, amusing. Her fearlessness is definitely a draw card for him. The Pisces man Scorpio woman relationship can definitely go the distance.

When they are comfortable with each other and allow their depressive natures to come between them, the Scorpio woman will want to utilize all his resourcefulness to find a way to move forward. Once she discovers that she is in love with him, nothing will stop her from trying to make him happy.

The instinctive Scorpio woman will welcome the possibility of being the strength of the relationship with the romantic Pisces man. He will be fascinated by her charming personality and the courageous way that she approaches life.

She will want to ensure that once a Pisces man Scorpio woman relationship has commenced, he is going to stay the distance and not break her heart. The Scorpio woman will initially hold back from jumping in with both feet. She will find herself opening up to him, allowing him sight of her vulnerable and private emotional status. This will reassure him that she is invested in their relationship.

She will adore his imaginative point of view and inclination to embrace his sentiments. When the Pisces man and Scorpio relationship works, it works well. This couple has a shared complexity of emotions, and they are mutually prone to miserable periods.

The Pisces man Scorpio woman love compatibility supports a robust combination that can go the distance. They will take their time in agreeing to start a relationship. When the eventually come together, they have the capability of having a seriously great emotional level between them. Their personalities are varied which is what balances them well together.

The passion between the Pisces man Scorpio woman is based on trust and romance. When they become comfortable in revealing their true nature, they will discover an entanglement that works beautifully. He is comfortable to courteously provide the perfect setting for her to exhibit her uninhibited impulses. 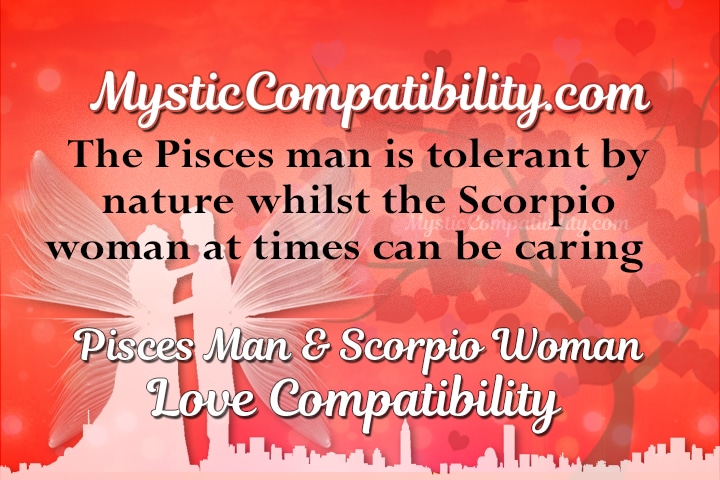 The Pisces man Scorpio woman sex will be within a setting where equally their desires are instinctively responded to. Neither of them is very comfortable to express their sentiments and have a preference for trusting their perceptions.

The Pisces man Scorpio woman sexually will link to each other. He will be the romantic aggressor in their connection, and she will feel contented to let things follow their development.

The Pisces man Scorpio woman marriage could potentially be very successful for this couple. Their home will be financially secure and at times mutually emotionally depressive. The Pisces man is tolerant by nature whilst the Scorpio woman at times can be unfaithful when pushed too far. He will want to have children in the hopes of making her happy and more homely. She will balk at the idea feeling hemmed in, and this will exacerbate the depressive natures.

The tolerant nature of the Pisces man and the domineering Scorpio woman will result in a balance of emotional needs and wants. She will want to control their finances, and he will not fight her on it. There is a mutual respect for each other that is clearly evident for all to see.

Their love is what will bond them and aid them in overcoming almost any obstacle. The Pisces man Scorpio woman in love have the propensity of creating a robust and meaningful connection between them.

There is a strong level of intuition that the Pisces man brings to the table. She has an intense need not to share all her emotions, and he will perceive more than she lets on. The Pisces man Scorpio woman lovebirds willingness to work together allows for a strong bond that will result in their relationship going the distance.

Even when they have issues, they will find a way to talk through things. Their ability to communicate will draw them to each other and strengthen their love for each other. At times her impatient nature will result in frustration as to the time he takes to make decisions. She will learn how to not rush into things, and he will embrace the need to be more decisive.

The ingenuous Pisces man and the pessimistic Scorpio woman can theoretically have a truly calamitous association. Sadly when things go wrong, uncertainties and tension can lead to a crevice of incompatibility between them.

The creative Pisces man has extravagant viewpoints of what their love-life should be. Should they not ensure that their connection is supported by honest affection and admiration for one another, this relationship is doomed to failure.

At times the Scorpio woman would potentially agree on what he wants to do. This is when she will aid him to bring his plans to fruition. Then there will be times that she will become frustrated with him and his constant ways of wanting to do things. She prefers to work towards things that are attainable. He will want more out of life, and could potentially find her to be a bit staid and boring.

At times the Pisces man dating Scorpio woman will discover that her haughty nature will become too imperious for him. When he tries to let her in on his hurt, she will become irritated feeling restricted by his depressive state. When the arguments begin the relationship starts to fall apart.

When the Pisces man wants to get the attention of the Scorpio woman, he needs to put himself out there for her to notice. Once she notices him, he can ask her for advice on a matter. She loves to be in control, and when he comes across as someone who needs her to, she will relish in the idea. To keep her interested is going to be the hard part, as she is energetic, and he is homely.

When a Scorpio woman wants to attract a Pisces man, she can display her loving and caring nature. She should hold back on revealing her crazy side. He can be quite calm and collected, which might scare him off. Once he is hooked, he will relish in her adventurous spirit. Her ability to take control of things will keep him enthralled.

The Pisces man Scorpio woman compatibility ends when their numerous attempts to keep things together have failed dismally. There will be snide comments that lead to fiery arguments and extended depressive periods. Their mutually depressive personalities are what could tear them apart.