In a Pisces man Gemini woman compatibility both are mutually visionaries. Their engagement will be elegant and not without an air of class. They have the propensity to either make a fabulous go of things or a right royal mess. Whilst he is focusing on spiritual matters, her intellect results in her continuous search for knowledge.

Their curiosity is what draws them to each other. Charm and wit come naturally to the Gemini woman. She will have people flocking around her wanting to get to know her. The Pisces man will appreciate that what he perceives her to be is exactly who she is.

The Pisces man Gemini woman in love find it really easy to make new friends. They are quite popular and easily likable. There is an engagement with other people and an interchange of interests. The Pisces man has a reputation for being very sensitive. He can intensely swing from being deeply depressed to ecstatically happy. Fortunately, her logical thinking will help to reason on his apprehensions and alleviate some of them.

The Pisces man Gemini woman friendship will work really well for them. Being friends is always a good way to start any relationship. Whether they should progress it to anything more is another thing altogether. They have a deep desire to make everyone they interact with happy and contented. Their connection will not have the drama that most relationships have.

The Pisces man Gemini woman love compatibility will not be an easy feat. When he is able to feel confident in their relationship and no longer be sensitive about almost everything the relationship can stand a chance. She will need to become more sensitive to his feelings if they want to make a go of it. When they are able to compromise and meet in the middle of their different personalities, this relationship can go the distance.

Romance for the Pisces man Gemini woman couple can be very pleasant. Their courtship will be understated and rational. Mutually, they are stimulated by innovations. Their prominence will mainly be on communication instead of carnal and demonstrative entanglements.

Passion for the Pisces man and Gemini woman relationship will take some work to thrive. It is not something that the either of them is very comfortable with. She has a reputation for being impatient and adventurous, whilst he is more about the feelings involved. Should they compromise to meet in the middle, this relationship can flourish.

Pisces man Gemini woman sex can be quite kinky if they allow it to be. The Gemini woman will plan scenarios and the Pisces man will want to react on how he is feeling at the time. When he allows himself to relinquish his inhibitions, there will be fantasy and role play that will form part of their union. He will need romance to keep their connection alive. He will enjoy her willingness to experiment. They will find that sex dispels the nervous energy built up between them.

He will need romance to keep their connection alive. He will enjoy her willingness to experiment. They will find that sex dispels the nervous energy built up between them.

The Pisces man Gemini woman marriage will be a test of responsibilities that they potentially will fail. The Gemini woman finds it difficult to focus on the detail, and the Pisces man is a known procrastinator. 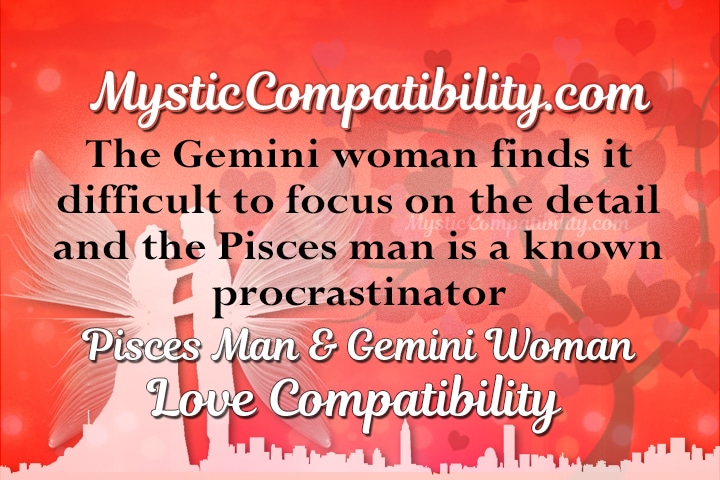 The Pisces man Gemini woman soulmates will flourish at entertaining and socializing, but neither of them has any form of responsibility to make a marriage successful.They will find that they have an ability to communicate freely with each other. There will even be a comfortableness to chat about things that others might find difficult.

The Pisces man Gemini woman lovebirds will be drawn to each other when together. Mutually they would want to make things work between them. Their connection will initially be strong due to their ability to communicate so well with each other. He is sympathetic and non-critical. She is full of culture and nonchalant.

Mutually they are creative and imaginative which goes a long way to making the Pisces man Gemini woman relationship work. They make delightful nomadic companions who are both interested in discovering new possibilities. The Gemini woman will be full of inimitable and stimulating ideas. The Pisces man will open himself up to the possibility of enjoying a variety of eccentric “date nights” which will keep the relationship pleasurable.

Neither of them obsesses on after a disagreement and is able to move on quite rapidly. This always works well in any relationship to keep things successful. The Pisces man’s instinct is able to help him to comprehend the Gemini woman’s ever altering sentiments.

The Pisces man Gemini woman have the ability to have a very loving relationship. The Gemini woman will find that she really adores her transcendent Pisces lady. He really does find her fascinating, and she will draw to him immediately.

The Pisces man dating Gemini woman will need to be accepting of the behavior if he wants the relationship to work.The Gemini woman will often be away on business and pleasure trips. He is known for emotional extremes, and she might become frustrated by the behavior. With the Pisces man’s sensitivities, he will begin to think that she does not feel the same about him. This could lead to them drifting apart and the relationship coming to a sudden end when neither of them expected it.

Their emotional level is where this relationship severely breaks down. The Pisces man and the Gemini woman are on completely different levels. She is an outrageous flirt, and he will be deeply hurt by her actions. Albeit the flirting is not done intentionally.The Pisces man will struggle to continue trusting her, realizing that her behavior is never going to change. She will be viewed as someone that is too hot to handle.

The Pisces man needs constant praise and support, and the independent Gemini woman might find it stifling.They may become easy-going with each other and have an open marriage.

When the Pisces man wants to get the attention of the Gemini woman, he can be a little flirtatious in front of her. In their group of friends, he might have to wait his turn as she will have a lot of suitors. He can muster up all his confidence to initiate a conversation with her. When he is feeling down, he should hold back on being depressive and rather try and be the better person. His infectious sense of humor is a calling card which she will happily accept.

When the Gemini woman wants to attract a Pisces man, she can simply just get his attention. With her talkative and entertaining personality, she will find it comfortable to get his attention. Her intellect will be a big draw card. Once he stops to engage with her, she can complement him on his demeanor, and he will feel flattered by her attention. He is looking for someone to help him straighten out his life, and wants some signal that she will be able to do that.