The Aquarius woman is usually born between January 21st through February 19th. Aquarius women are easy-going and they love to have a good time. She is a free spirit who encourages others to be free as well.

The Aquarius female tries not to be judgemental, which could be why she has so many friends. Her friends can always count on her to be there for them, even if her employers may not be able to say the same. Everything about this Aquarius woman is unique, making her a truly interesting person to get to know.

Aquarius women in love take great pride in their independence. She will not want to be with someone who tries to take that away from her. She is not a huge fan of commitment. But she will get into a committed relationship if she is with someone who does not make her feel trapped. She is not likely to be totally loyal unless it is made explicitly clear by her partner that they want to be in an exclusive relationship with her. Once the Aquarius female knows that her partner is serious about her, she will never cheat.

Aquarius women personality love to have sex. She sees it as a merging of both physical pleasure and mental stimulation. She loves all things creative and kinky. Everything from role play, bondage, and even kinkier stuff are on the table. She still will want to be able to call the shots, though. The Aquarius woman in bed likes being dominant. She will only be submissive if she is with someone who she can truly trust.

Aquarius women get bored easily. She won’t want to have a nine to five job sitting in an office somewhere. She doesn’t mind having a full-time job, but she will want one where she can use her creativity in her work. She wants to have some freedom in her work as well. Being an artist, musician, writer, or having another creative career will be the best for her. The Aquarius female can also run her own business, freelance, or do circuit fairs as well. 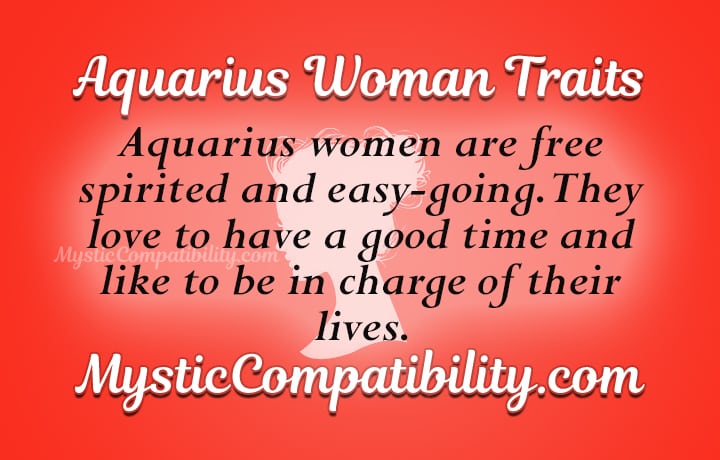 The Aquarius woman traits suggest that she likes to be in charge of her own money. She will not be happy if she is with someone who wants to take control of all her assets. She is not one to save money, as she doesn’t like to just have it sitting around in a bank somewhere. However, she will invest her money if she believes in a company or group. She spends her money freely, but she also loves finding bargains, going to sales, and using coupons when she shops.

The Aquarius female likes to go out, not get out. She will exercise if her friends do, but she is not likely to exercise by herself. She will need the motivation to exercise. Playing sports and doing other group or competitive activities will help to motivate her. However, her friends can also motivate her to have bad health problems too. The Aquarius woman personality traits show that she is likely to eat out when she is with her friends. If she falls into the wrong crowd, she may also be tempted to drink too much or do drugs. She will need to make sure that she keeps her self-control in check.

The ruling body parts for Aquarius women are her shins and ankles. For this reason, an Aquarius woman’s shins and calves often look nice. This can also mean that she is more prone to hurting these areas of her body. If she does not learn how to focus better, then she will likely be clumsy and twist her ankle. Maybe Aquarius zodiac sign women do complain of ankle problems.

Aquarius woman traits show that they love to get out and spend time with their friends. She is friendly to everyone who she meets, as long as they are friendly towards her. She will treat people as they treat her, no better and no worse. She does not tend to have many serious friends. She likes to hang out with people to have a good time. She would rather be alone when she isn’t in a good mood. She will always be there to listen to her friend’s problems, but she would rather keep her own problems to herself.

The Aquarius woman personality can make friends will all types of people. Aquarius women rarely judge based on religion, sexuality, or anything else. She accepts people for who they are because she wants to be accepted for who she is. She is loyal to all of her friends. She will not talk behind their back. She does whatever she can to encourage them to live their lives to the fullest. All in all, the Aquarius woman makes for a wonderful friend.

Aquarius women often look back fondly on their childhoods, and they often love their families, but that doesn’t mean that they want to hang around near their families for the rest of their lives. Most times, an Aquarius female will move away from home, rather than live and die in the same city she was born in. She will travel to see her family every once in a while. But for the most part, she will want to travel and see all that she can see. This may give her little face-to-face time with her family members, but she still thinks of them every day.

An Aquarius woman personality will always stand out from the crowd. She tries to make her style all her own. Sometimes this means that she will dress wildly, wear mismatched outfits on purpose, or dig around in thrift shops to find the perfect vintage outfit. She doesn’t care about which clothes are trending. Crazy patterns are what stands out to her, not solid colors. The Aquarius woman tends to look best in light blue and in shades of purple.

Accessories are used to add some flair to her outfit, not to show off how much money the Aquarius woman has or anything like that. She likes all types of jewelry, but she doesn’t like jewelry made out of all types of metals or gems. She likes big rocks, but she doesn’t need them to be made out of diamonds or anything that expensive. Her favorite stone tends to be amethyst, which is a purple stone that can match with many of her outfits.

The Aquarius woman is creative, smart, and independent. There is nothing that can hold her back. She will live her life the way she wants, and she won’t let anyone tell her what to do. She lives life to the fullest and inspires everyone she meets to do the same.