The Scorpio man Aquarius woman compatibility affair will not be easy for either of them. She is able to complement him in ways he never previously considered. Her carefree personality and eccentric awareness will create a desire in him to own her. He will stop at nothing to ensure a relationship is initiated. They mutually relish a challenge and will be captivated by each other. Once he has got himself into her sphere of attention, nothing can stop them. Their lives will never be the same, but neither will ever regret it.

The strong Aquarius woman will not hesitate to engage with the enigmatic Scorpio man. Her flirty personality and his mystery make for a good combination of unfamiliar territory for both of them. Instead of being in a big crowd of people, his preference is to engage in an intimate setting with a few of their closest friends. She will discover an intense personality and will never wholly understand what is going on inside his mind. He too will enjoy the fact that she is not an open book. The challenge of unpacking who they really are will not be lost on either of them.

Scorpio man Aquarius woman in love would be overjoyed to have met their match. They will have a very independent and private relationship. Generally, they are strong willed, but when they meet each other, they will reconsider their refusal to compromise. With an air of superiority, they shrewdly contemplate their next powerful move. When this couple comes to an understanding, it results in a power couple that can weather the storm.

Their Scorpio man Aquarius woman relationship can go either way. They will get on like a house on fire, or end up burning each other for want of control. She is totally aloof and he, completely emotional. Scorpio man will admire her intelligence. On the other hand, Aquarius woman would fall in love with his inner strength. Emotionally, there isn’t much of a connection between them. Her detached manner is something that the Scorpio man has never come across before. His intense feelings are something that she is foreign to. If they decide to venture down the path and start a relationship, it might struggle from day one to get going.

The intense Scorpio man likes to know that his partner is there for life, he is looking for a soul mate. The Aquarius woman loves her freedom and it might become too much for her when she feels that he just wants to tie her down. She will not offer the commitment that he is looking for and will fight to keep her independence. He could become resentful with her blasé attitude that if things work out, then that’s great. If not, there will be other partners for her. Neither will easily compromise for the other.

The moody Scorpio man will frustrate the Aquarius woman completely. Especially when she tries to reason with him to try and help him. However, he refrains from breaking down what he is feeling. She will be left puzzled and he will continue regardless. He will try and help her to trust her intuition, she is very rational and will not be able to grasp where he is coming from.

Scorpio man Aquarius woman love compatibility is unlikely as neither will change for the other to ensure a successful relationship. They just won’t understand each other enough to last for very long.

Passion does not define this Scorpio man Aquarius woman love. The Aquarius woman views sex as a logical activity to pass the time. The Scorpio man has an intense sex drive. The challenge would be whether she is ever able to get to the point where she is comfortable enough to trust and open up to him. Passion for both of them is simply a waste of time. They both believe that it actually is a sign of weakness and vulnerability.

Scorpio man and Aquarius woman sex will be unconventional. Their propensity for mind games and desire to control will lead to many hours of playful games of domination. Make up sex will frequently be utilized to wash over arguments. In the bedroom, the Aquarius woman will generally be in control and the Scorpio man will willingly surrender to her commands.

Unfortunately, problems may start to arise when the Scorpio man feels things on an emotional level, while the Aquarius woman is a rational thinker. His passion may be overbearing for her when she wants to be more playful and fun loving. He will not hold back with his mind games and kinky ideas. She is able to keep up with him to a point, and then will tire out long before he is completely satisfied.

Marriage for the Scorpio man Aquarius woman Zodiac match need not be a legally signed agreement. They speak the same language of trust, and it is mutually a bond for them. From a financial perspective, he is very good with their funds. He will want her to meet him half way on the household chores. The Aquarius woman will find it mundane and the Scorpio man will find himself frustrated and overworked. 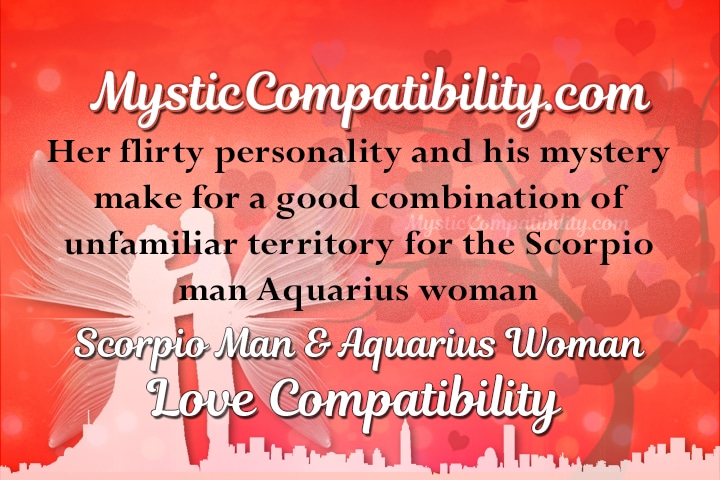 From the minute the Scorpio man Aquarius woman soulmates connect, their relationship will never be boring and staid. They will continuously be discovering something new about themselves and their partner. With the Scorpio man’s charm and the Aquarius woman’s intellect, their connection will be dynamic and intriguing.

Scorpio man Aquarius woman in bed will really get to know each other. The Scorpio man holds nothing back, and the Aquarius woman has the opportunity to look deep into his soul. When they want the same things, this power couple will make an invincible force to be reckoned with.

The Aquarius woman is independent and the controlling personality of the Scorpio man will result in many arguments. She may find that she starts to lose her own personality in trying to satisfy his needs. Her need for freedom will be what breaks them. He will want to possess her, and she will be trying to run off on new explorations.

The Scorpio man’s need for possession and the Aquarius woman’s desire to do her own thing will clash in heated disagreements. Logically she will always try to help him understand her feelings, but his stubborn nature will clash when she refuses to do as he has asked.

When a Scorpio man wants to attract an Aquarius woman, he does not need to hold back. She will be drawn to his power, but he will never be able to control her completely. He need not be sophisticated and impolite with her. This is a woman that revels in being shocked, he can pull out all the stops to try and astonish her.

When an Aquarius woman wants to get the attention of a Scorpio man, she needs to get ready for a test. Her mental acumen will be the draw card for him. He will be drawn to her power, and he will want to incorporate her into his inner circle.

Scorpio man Aquarius woman compatibility is over when they burn so hot, they ignite each other. Their break up will be dramatic and not a pretty sight. They will not share things equally, but will rather have secured their assets long before the relationship actually got off the ground.