Scorpio man Pisces woman compatibility will be one that is profoundly deep and emotional. Commonly, their body language and glances will ensure that the other is very well aware of the attraction between them. Her pleasantly ladylike and idealistic personality ensures that his needs are well cared for. The mysterious Scorpio man will be in the center of the room, whilst the introverted Pisces woman is standing on the side watching. She will be drawn to his seemingly dark nature. He will take note of her trying to avoid being the center of attention, and intrigued by her subdued personality.

She will bring his protective nature to the fore. He will adore her imaginative thoughts and willingness to embrace what she is feeling. In return, she will be fascinated by his charm and the fearless way that he approaches things. When they are comfortable with each other and allow their depressive natures to come between them, the Scorpio man will want to utilize all his resourcefulness to find a way to move forward. Once he is in love with her, he will stop at nothing to make her happy. The instinctive Scorpio man will welcome the possibility of being chivalrous for the romantic Pisces woman. Even more so as Scorpio man Pisces woman relationship goes the distance.

The Scorpio man will initially hold back from jumping in with both feet. He will want to ensure that once he starts a relationship with the Pisces woman, she is going to stay the distance and not break his heart. She will reassure him that she is invested in their relationship and he will open up and allow her in to his vulnerable and private emotional status. Jointly, they will have wanted an emotional Scorpio man Pisces woman affair that they are able to have together. The connection between them supports a strong union that can go the distance. When the eventually solidify their union, they have the capacity to create a seriously coupled level of emotion between them.

Scorpio man Pisces woman in love can be good but is by no means guaranteed to endure any problems they may have. They are mutually emotional and not always the good kind. Thus, they may end up in a somewhat dismal relationship with no way help themselves out of it. Consequently, they will need to find a balance between his zeal and her placid nature if they want to sustain a satisfying relationship.

Scorpio man Pisces woman passion will be in abundance. He will feel confident to reveal his true nature. She is happy to graciously provide the perfect platform for him to demonstrate his unrestrained urges. This will result in him being willing to disclose a level of sentiment which he generally does not reveal to his partner. As the trust between them is fortified, it reveals the more romantic side of the Scorpio man.

Sexually they are very well matched. Neither of them is very comfortable to verbalize their emotions and prefer to trust their perceptions. The Scorpio man Pisces woman sexual relationship will be within an environment where both their needs are responded to instinctively. Sex becomes an intimate way that they will bond together. She will be the romantic aggressor in their relationship and he will feel comfortable to let things follow their course. When they take things into the bedroom it will reveal the Scorpio man’s authentic and haunted desire. The Pisces woman will, with open arms embrace all that he has to share.

Truly, Scorpio man Pisces woman marriage will be a good match uniting very different individuals. Scorpio man Pisces woman lovers would create a home with financial security and deep emotional bonds. As parents, they will work well together. His tolerant nature will ensure that she is able to get him to forgive just about anything. Especially when she is not always faithful within their relationship. He will try and get her to agree to have children in the hopes of keeping them together. If they do, their naturally depressive personalities will probably be passed down to them. They could end up in a home full of depressive people, hopefully not always at the same time. 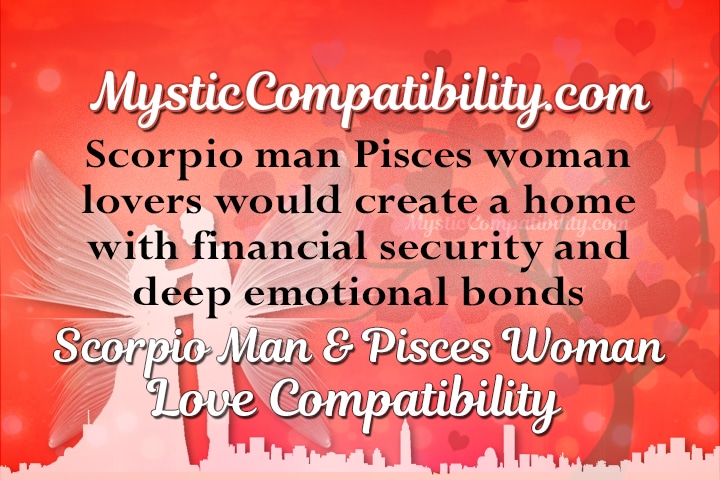 Once the Scorpio man and Pisces woman connect he will realize how intuitive she actually is. She is able to perceive that there is a lot more going on than what he allows her to see. They will immediately have a comfortable and responsive association that can grow into a strong connection.

There will be a mutual respect for each other that is clearly evident. This, in turn, will draw them to each other and strengthen their bond. His impatient nature will surface when she takes extra-long to make a decision. The love in the Scorpio man Pisces woman love compatibility will overcome almost anything and not prevent them from having a robust association.

When the Scorpio man wants to control their finances, the Pisces woman will graciously accept his need for control. She is easy-going and his domineering personality will relish in the fact that there is no challenge here for him.

There will be times in the Scorpio man Pisces woman soulmates affair that his imperious nature will be overbearing for her. She will want to share with him that his attitude is hurting her. He might not appreciate when she becomes vocal about how she feels. He will not want to feel restricted, and will lash out at her delicate ambiance.

The imaginative Pisces woman has lavish philosophies of what their love should be and how they should be with each other in other peoples company. At times the Scorpio man might agree and help her dreams come to reality, other times he will find them irritating. He prefers to work towards things that are achievable. She wants more out of life, and will find him to be a bit boring.

When a Scorpio man wants to attract a Pisces woman, he should manifest his strong sense of caring for her. He can offer her some advice and follow up how things went after that. When he takes control of situations that feel beyond her control, she will be completely infatuated by him.

When the Pisces woman wants to get the attention of the Scorpio man, she can be a little bit in the lurch. He will want to come to her rescue. When she shows him some emotion, he will be so intrigued by her that he will immediately want to get to know her better.

Scorpio man Pisces woman compatibility is over when they have completely aggravated their depressive natures to the point of creating a total grim relationship. Neither of them will want things to end, and they will try numerous times to make things work.