The Sagittarius man is usually born between November 23rd through December 21st. If a man is born on either the beginning or end dates, he should check the Sagittarius zodiac sign dates for the year he was born.

The Sagittarius man is always ready to have a good time. Having fun is one of his greatest goals in life. He loves to travel and to make friends. He is open to trying just about anything, which just fills his life with even more adventure. His love of exploring can sometimes make it difficult for him to make meaningful connections with other people. But that doesn’t stop him from being a socialite when he is around people. The Sagittarius man is exciting and cheerful. He makes a great friend and a great man, no matter where in the world his travels take him.

The Sagittarius man traits show that he loves to have a good time, which is why he tends to have more short-term relationships than long-term ones. He loves his independence, and that is more important to him than being in a committed relationship. He loves to have fun no matter what kind of relationship he is in. If he feels trapped, he will flee. If he feels comfortable, then he will stay and fall in love. When in love, the Sagittarius man will never cheat. However, if he does not trust his partner, then he may.

The Sagittarius man loves to have sex, and he doesn’t need to be in love to do it. He will have sex with anyone who he finds to be extremely attractive, so long as his partner finds him to be attractive as well. The Sagittarius male is passionate in bed and he is always open to trying new things. He has a few kinks and fantasies he would love to play out, and he will gladly take suggestions from his partner as well.

The Sagittarius man personality traits show that he gets bored easily, which can make it hard for him to stick to a traditional 9 to 5 job. He will want to work somewhere where he can use his creativity whenever he wants to. He also wants the ability to be able to move around for work. Traveling is a perk he will love. Owning his own business, being a travel guide, teacher, writer, artist, or any other creative job that will allow him to travel could all be perfect jobs for the Sagittarius man. 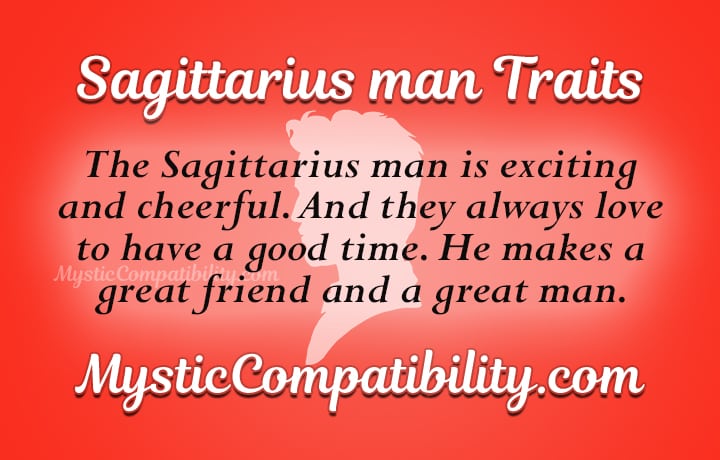 The Sagittarius guy does not care much for money. To him, it is more of a tool or a means to an end than it is a great thing in itself. He will likely only have as much money on him as he thinks he will need. He does not worry about living on the cheap. The Sagittarius man personality traits show that he is not always great with money, which could be why he doesn’t have a lot of it. He is not extremely materialistic but traveling and everything that comes with it tends to rack up a high bill. This leaves the Sagittarius man with memories that can last him a lifetime, but only enough money to last him until his next paycheck.

The Sagittarius man traits show that he loves to stay active, especially before he hits middle age. He seems to always be moving, which makes it easy for him to stay in shape. He seems to be able to eat whatever he wants without gaining too much weight. Once he surpasses middle age, he is less likely to be active. When this happens, he will gain weight quickly unless he learns how to balance his diet.

The Sagittarius man personality is almost always in a good mood. He is a charming and charismatic man. He seems to be able to draw new friends towards him wherever he goes. He does his best not to judge anyone for things that they cannot control because he would hate to be judged. He treats people as they treat him. He is open-minded to learning new things about people, and he will gladly share his story to any friend who has questions.

Sagittarius men make many loose friendships that are good for partying and nights out. However, he has a harder time making close connections with people. This is not because he is distance, but instead because he doesn’t like to stay in one place for very long and he is not great at keeping in touch with people. Anyone who wants to stay in contact with a Sagittarius guy will need to call him first.

The Sagittarius man is likely to remember the fun parts of his childhood and forget all of the rest. Even as a boy, he’s not one for rules and staying indoors. He loves to play outdoors, rain or shine. He will spend more hours away from the house than inside of it. When he is an adult, he will likely move far away from home. This is not because he doesn’t want to be around his family, but instead because he loves to move around. He will likely come back to visit his family members every once in a while.

The Sagittarius man could care less about what the trends are, but he does care about how cool he looks. The Sagittarius man traits show that he has creativity pouring out of every pore. He loves to make creative choices in his wardrobe. Bright colors and playful patterns are likely to be the main things in his closet. He may have some less dynamic clothes for funerals and other formal events, but for the most part, he likes to keep things fun.

Accessories are not necessary for a Sagittarius man, but he does find them to be fun! He will buy little trinkets for himself every now and again. It doesn’t really matter what it looks like, so long as he thinks it will add some charm to his outfit. Because of this jewelry and accessories of any kind make great gifts for Sagittarius men.

The Sagittarius man is one of the most fun zodiac men. He is friendly, charismatic, and he has more than enough energy to do all of the things that make himself happy, as well as bring some friends along for the ride. Anyone would be lucky to be friends with the exciting Sagittarius man!