The Aquarius man Leo woman compatibility can be rather one-sided at times. Initially, there is a large amount of intrigue surrounding them. He can appreciate her inner warmth and his innovative mind keeps her intrigued. The fiery Leo woman will melt all the barriers the Aquarius man is used to putting up around himself. She may, in fact, possess his heart but never his entire being. He is always his own man.

The attraction between the Aquarius man Leo woman in love will be instantaneous. Sparks and chemistry will abound. She will be awestruck as to his different persona. He doesn’t seem to care what other thin and goes off to do whatever he wants. She sees him as a challenge, and his seeming disinterest is what grabs her attention.

Their interchange easily gets underway, and they will have met a partner that excitedly challenges them. Together they can laugh about all the hard stuff. This helps the Aquarius man Leo woman soulmates to get over arguments that would break other couples. The Leo woman is very emotional and full of the joys of life. Her sociable and warm personality results in an openness that is engaging. On the other hand, the Aquarius man is sociable, but his emotions are never really easily revealed to anyone. When he does give in to his emotions, he then rationalizes them to death.

Compatibility between the Aquarius man and Leo woman is initially based on friendship. This is always a good platform to initiate relationships, and it really works for this couple. Problems may arise when the Leo woman takes it personally that he is not declaring undying love for her every minute of the day. Their compatibility starts to develop cracks when it comes to satisfying their partner‘s needs. When they can find the time to sit down and communicate with each other, they will be able to find a middle ground. This Aquarius man Leo woman relationship can go the distance.

Passion will be very one-sided for the Leo woman. The Aquarius man can be rather detached, and she might have to stage it from time to time. What really works for this Aquarius man Leo woman love compatibility is a connected passion. They are likely to enjoy a bold and experimental love life, with lots of fun and laughter.The Leo woman is more physically passionate, and on the other hand, he is more mentally engaging.

Aquarius man Leo woman sex will be fabulous for both of them. Theirs will definitely not be a mundane and missionary approach. He has a bucket-load of scandalous ideas to try. She will appreciate his boldness in suggesting them, whether she goes along with him is another thing altogether. Outside the bedroom, this couple can operate on a very different emotional level.

Their initial Aquarius man Leo woman compatibility is a great foundation to play off of. He enjoys mind games, and she can compromise to provide the platform to keep him interested. She enjoys their lovemaking on a primal scale, while he needs more of a rational stimulation. Mutually they have a ferocious stamina and can keep up and fulfill their partner’s every desire.

Aquarius man Leo woman marriage can work really well. They are potentially a perfect match when it comes to lifestyle and relationship choices. They can embrace the other’s need for independence, and they will allow it on a regular basis.

The Aquarius man simply does not settle down for just anyone. They are mutually supportive of their Aquarius man Leo woman marriage mate. Providing the ability to grow and prosper as individuals and together as a couple. The Aquarius man has the energy, and the Leo woman has the tenacity to put in the effort to keep each other happy. 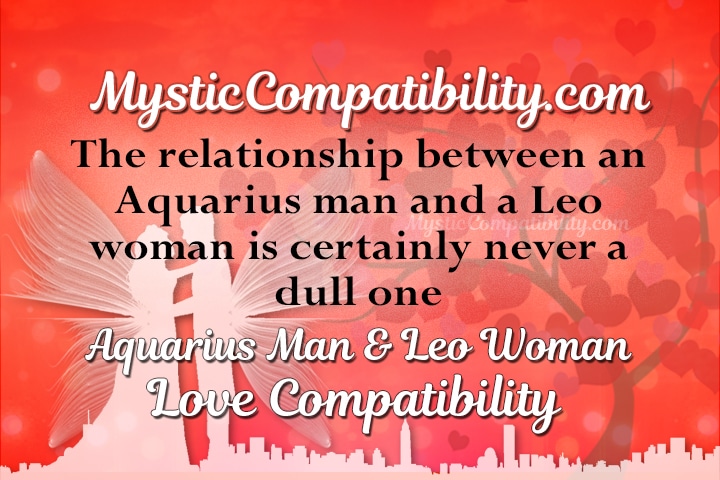 The Aquarius man is generally in the crowd discussing his many philosophies. On the other hand, the Leo woman can be the life of the party. The witty banter between them is what first attracts the Aquarius man Leo woman lovebirds to each other. She easily commands his attention with her graceful and charming personality. For this couple to meet up is relatively easy, due to their mutual charismatic outlooks.

The Leo woman is looking for a partner to discover life with. The Aquarius man is seeing someone to share in his new and exciting adventures with. He easily draws her in with his creative thinking and outgoing personality. The Aquarius man Leo woman compatibility involves the ability to spend many hours getting to know each other

The Leo woman likes to be adored. Albeit he will adore her, her needs to find out ways for his ability to provide. The Aquarius man is simply not emotionally expressive enough for the Leo woman. As a result, he will tire of her demands for attention. He simply can’t be off saving the world if he has to sit and hold her hand to make her feel loved. He does love her optimism and enthusiasm. However if the relationship ends in an Aquarius man Leo woman break up, he will just move on. On the other hand, she would be devastated.

The Aquarius man just is not interested in stroking her ego. He finds this to be a tedious pastime. This may lead to her assuming that he is too detached to provide for her. As a strong woman, on occasion, she automatically takes charge of their Aquarius man Leo woman union.

The Aquarius man tends to have his own ideas on how things should go. This is where the problems begin. He may find her melodramatic at times while she thinks he’s unbalanced. This is where her claws come out. Once he tries to reason with her, he may grow weary of her resolute stance. Eventually, the Aquarius man Leo woman will leave things unresolved.

When the Aquarius man tries to attract the Leo woman, he can be himself. There won’t be any misunderstanding as to her interest. Either she is, or she isn’t. She knows her mind and prefers to choose rather than be chosen. He can be full of surprises, with a little shock treatment. When she turns her attention on him, he needs to be firm and stand his ground.

When a Leo woman wants to get the attention of an Aquarius man, she can feign indifference and parade it past him a few times. This will definitely get his attention. He hates to be ignored and will want to find out why she is not fawning all over him.

The Aquarius man Leo woman compatibility is over when a lot of miscommunication has taken place. They will no longer be on the same page. He will be lost with her constant ability to change the rules, and simply lacks the foresight to keep up with her mind games.