The Aquarius man Libra woman compatibility involves many similarities. They complement each other with their detached view on life. The conservative Aquarius man will enable her to manipulate him to do her will. She can be an asset to his career and social standing, and he will be very attracted to her.

He has a shortage of social skills, and she can aid him to be more acceptable within their circle of friends. As their Aquarius man Libra woman love compatibility develops, they will discover that they can learn a lot from each other. He can help her to become more independent and be less needy. His freedom and loving personality can develop to embrace emotions.

There is a kindness and mutual reverence between them that is very distinct. This Aquarius man Libra woman couple can be absolutely best friends. She can bring out the gentleman in him. Finally, he has found a lady worthy of his affection. They are very much on the wavelength when it comes to their mutual need for space.This couple is attracted to each other’s intelligence, talkativeness, and impracticable possibilities.

The Aquarius man is not romantic but rather pragmatic. The Libra woman, on the other hand, is one of the most romantic souls. He will be enthused by her idealism. She manages to awaken some romance in him. Occasionally, she might find that he brings home some romantic gesture for her.

With their mutual need for space, initially, they are not likely to see each other more than once a week. Their Aquarius man Libra woman courtship will be well-mannered and reverential. When they agree to engage in a relationship, things between them will most likely move forward in mutually agreed steps. The Aquarius man has the propensity to have slight stalker tendencies, especially when he finds a woman he is keen on. When he meets the Libra woman, she can eliminate his pursuer behavior.

This couple operates very differently emotionally. As a result,  their great Aquarius man Libra woman friendship can be problematic. The Aquarius man can be very aloof, and the Libra woman is very much in touch with her emotions. She needs constant reassurance of his feelings for her, and he is unlikely to tell her as often as she needs it. However, she is not possessive, and once she receives the reassurance she needs, she will renege and permit him a good degree of freedom.

She can train the Aquarius man quite easily. When there is something that her heart desires, all she has to do is suggest it. She can become very specific in her hints, and he will file all the information away for better days. This is the scope of the romance within him.

They are mutually gregarious and will make a charming and relatively happy Aquarius man Libra woman couple. They will rarely lose their temper or go out of their way to hurt each other. With her diplomatic nature, and clever outlook she can coax him to do whatever she wants. They will laugh about it afterward, because this will happen without him even realizing it.

Compatibility is not underpinned by their Aquarius man Libra woman sexual attraction. Neither of them will want to control the other or takes themselves very seriously. There is a real and enduring shared compassion between them, which makes the Aquarius man and Libra woman compatibility something amazing.

Passion for the Aquarius man and Libra woman can be surprisingly intense. From an outsiders perspective, they give the impression of being totally dispassionate. Aquarius man Libra woman in bed do suffer from a lack of passion.

Aquarius man Libra woman sex will be very important to this couple. They have the ability to have a really balanced outlook, which leads to even greater love making than anticipated. With the mutual agreement between them, even when and where they have sex will not be an issue. With her willingness to try just about anything, it will lead to very scandalous and racy engagement.

The start and finish of their Aquarius man Libra woman love making are likely to be as courteous. Each of them is very considerate of the other’s well-being. They both enjoy sex, but in quite an abstract way rather than with any great physicality. It’s not very high up their priority lists in any case.

Aquarius man Libra woman marriage will be a really good fit. They are equally rational, level-headed, and able to acquiesce. They share a common perspective and are likely to appreciate the same way of life. The Aquarius man can encourage the Libra woman not to keep score or hold grudges. This helps with general marriage conflict-resolution skills. 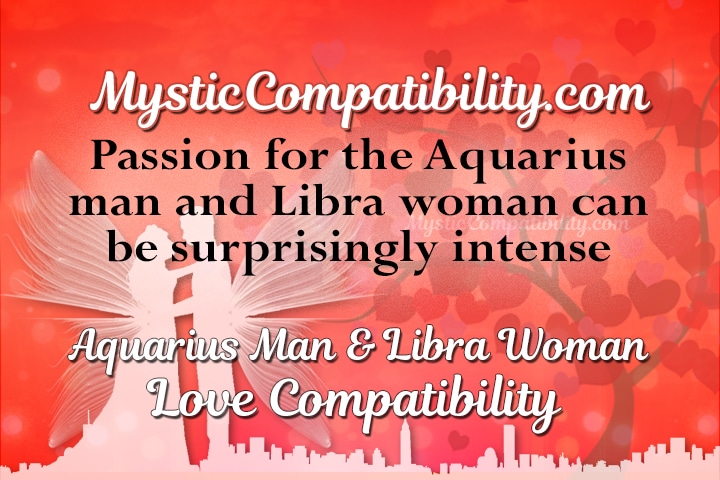 The Aquarius man Libra woman soulmates are both are very social creatures. They immediately connect on a mental level. She enjoys a good debate, and they can go back and forth for hours discussing a variety of topics. Theirs is an instant attraction strengthened by his charming attitude and her flirtatious manner. They feed off of each other’s vigor and challenge their partner’s body and mind.

In an Aquarius man Libra woman love compatibility, both are very trusting individuals. Furthermore, they are not perturbed when their partner goes off on their own. The Libra woman excels at mind games, and he will match her step for step.He doesn’t want conventional love, which keeps any partner on their toes.

She will put forth much effort to keep her mate happy. Even though he can be a bit flighty when he’s off taking in new adventures, he will reciprocate the loyalty. He will always return to the woman he loves.

Even though the Aquarius man can often be logical by nature, it’s not unusual for him to consider all options and choose the least popular one. For him, this is the best way to discover new adventures. This, unfortunately, leads to some confusion for his partner. She will find it difficult to regain control of things.

When it comes to their finances, the Libra woman loves pretty baubles, and he is rather frugal with his money. She has to hold back from frivolous spending. Otherwise, there will not be any peace in their Aquarius man Libra woman household.

When the Aquarius man wants to get the attention of the Libra woman, he should not come on too strong. He will need to find a balanced middle ground. Once he can understand her need for a courtship that is neither intense nor lax, she will be putty in his hands.

When the Libra woman wants to attract an Aquarius man, she should display her business like persona. The Aquarius man can sometimes get lost in his adventures. However, her grounding personality will keep him focused. His Aquarius man Libra woman dating skills are not much to be desired. As a result, she will have to plan and take the lead to get things going.

The Aquarius man Libra woman compatibility is over when the Aquarius man decides he has had enough. The Libra woman may convince him to stay a little longer. However, it won’t be long, and he will again be heading for the door. He will turn a little sour at the fact that she excels at just about everything he has ever wanted to be good at.