The Sagittarius man Taurus woman compatibility doesn’t seem to have lots in common. Considering that he is fiery and she is cautious, the mixture can be quite disastrous. There is a strong physical attraction between them, he can be extremely passionate, and she is very romantic. She is practical by nature and looking for commitment. Sadly he is more interested in having fun and isn’t one for commitment. The Taurus woman prefers to take her time and analyze each situation before making a decision.

Once she has made up her mind, she doesn’t renege on her decision. Should he demonstrate the same courtesy to her, their Sagittarius man Taurus woman relationship can go the distance? She will struggle with his friendliness towards other people, especially when they are out on their own. He is fun and exciting while she is quieter and more reserved. Her opinion is that socializing should be done in the comfort of one’s home, whilst he is always on the lookout for a good time.

He lives for adventure and is always on the lookout for the next exciting adventure to engage in. Risk and adrenaline are very much a part of his personality. The Sagittarius man is constantly on the go, seeking the next big adventure. His independent streak and desire to explore the world can leave her feeling lonely at times. All her actions are planned to make herself feel innocuous and loved. The Taurus woman is all about steadiness and emotional confidence. Initially, they are fascinated with each other during Sagittarius man Taurus woman dating. However, as the relationship develops it will eventually become an intense frustration. This is mostly because of the common ground they wish they had but never seems to advance.

How the Sagittarius man Taurus woman friendship progresses will be difficult for the Taurus woman to understand. Trying to figure it out will drive her crazy. She is loving and kind and has the propensity to be deeply hurt by the Sagittarius man’s blunt disrespect. The Taurus woman doesn’t adapt very easily to change. At times he will feel suffocated by her disapproving tone towards his frequent stimulating escapades.

Passion is not a priority for either the Sagittarius man or the Taurus woman. He mystically feels passion. It’s not directed at any particular person, but rather for a higher power, or just life in general. When the Sagittarius man and Taurus woman are in love, he will have to slow down. Instead, he should focus on the physical aspect of their Sagittarius man Taurus woman love making. Her earthy energy requires a more realistic sexual experience, and he is not one who focusses on that aspect. 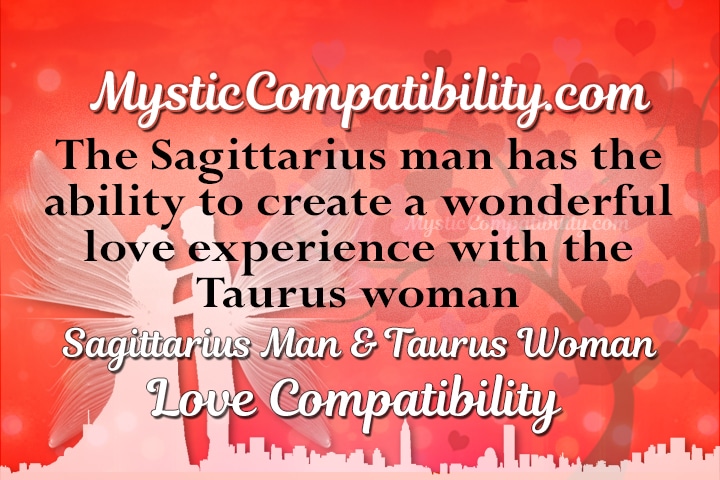 A Sagittarius man Taurus woman marriage will not be the best decision to make for either of them. Although they can have a passionate but sadly short lived affair, it’s challenging for them to live together on a long term basis. Should they decide to make some form of commitment, it will mean something completely different to each of them. He will never really settle down to be the person she needs him to be. She is more than willing to take care of all the practical matters that he can’t be bothered with.

Should the Taurus woman manage to persuade the Sagittarius man to settle down, she will not be able to sit back and just relax. Her obvious possessiveness and jealousy will lead to many heated arguments. This is especially as he becomes more comfortable within their Sagittarius man Taurus woman union. He will become restless with her constant comments about his need for adventure outside of the home. Eventually, it could lead to him going off and finding someone who does not try and hem him in.

The Sagittarius man may find himself wanting to bail when things start to become more serious than what he is used to. Should she have the ability to remain calm and trust that she doesn’t need to control him, he will return to her every time. All he cares about is having the freedom to gather new ideas and experiences.

This relationship is one of those that should never have been initiated in the first place. From the start of their relationship, the Taurus woman will not fully trust the Sagittarius man. He is perceptive and will be able to glean that she is holding back. If they decide to initiate a relationship, their Sagittarius man Taurus woman compatibility will stumble all the way through it. His nature is to move about at social events, while hers is to put down roots immediately. They’re usually heading in completely different directions.

The Taurus woman’s possessive nature will flare up, and her fiery temper will become evident. The laid-back Sagittarius man can be a little careless with his emotions. These differences could potentially end in the collapse of any compatibility between them. The relationship that may be in existence might end in a Sagittarius man Taurus woman break up.

When the Sagittarius man wants to get the attention of the Taurus woman, he needs to hold back on his adventurous spirit. At least until she has consented to a relationship, then he can try and encourage her to go with him on his excursions. When she asks for his opinion on things, he should try not be so blunt and honest. Equally, adding a little fluff to his answer to soften the blow.

When a Taurus woman wants to get the attention of a Sagittarius man, she can be a bit athletic and adventurous. She should avoid being too serious, as positivity is far more attractive for him. To keep him from becoming bored, she will have to appeal to his fiery nature and step up the passion on her part.

The Sagittarius man Taurus woman compatibility is over when there isn’t much left to keep them together. The Taurus woman will wonder why she even got involved in the first place.