The Scorpio man Aries woman compatibility will be passionate and stimulating. When they find themselves in the same space, they will quickly be drawn to each other. The blatantly sensual Scorpio man is compelling and mysterious. On the other hand, the poised and independent Aries woman is sensible and well-balanced. Her aura will be enticing to the secretly vulnerable Scorpio man.

Scorpio man Aries woman love match are used to getting their own way and will admire each other’s strengths. The Aries woman is not afraid to jump in and make things happen. While the Scorpio man has the perceptive depths to help her pursues the right goals. There will be an intense exchange of energy between them. Their bravado in social circumstances will be strongly evident. He is able to reveal a side of her where romance is not of pivotal importance to her. The mysterious Scorpio man will peak her curiosity and when she reveals her passion, he will be captivated.

Initially, the Scorpio man will nonchalantly be unperturbed when meeting the Aries woman. Underneath the surface all is not what it seems, in fact, nothing escapes his scrutiny. He is looking for a partner who will be at his side in advancing to success. With the Aries woman, he may have met his match. Their shared determination can really help this couple go the distance.When it works between them, it works well.

He is not a man who easily accepts no as an option. Neither is he held back from utilizing manipulation to get what he wants. The Scorpio man is resolute and attentive when it comes to his goals. The fact that neither of them can win all of the time will give rise to problems within their Scorpio man Aries woman relationship. The Aries woman very seldom does not get her own way. She has a fiery and volatile temper which he will see often when she has one of her spectacular outbursts.

However, she does not hold a grudge and her anger is over relatively quickly. He unfortunately always remembers, and his anger very seldom dissipates. When they find it difficult to agree on how their Scorpio man Aries woman love compatibility relationship should run, both of them will give rise to anger. They will quickly discover that they cannot control each other. The Scorpio man will be disheartened to find that his elusive power battles don’t seem to be getting anywhere with his secure Aries woman.

Scorpio man Aries woman friendship can be a sensational and a close-fitting partnership. They have mutual objectives and commitment is a good probability for them. Sadly so is the likelihood of infidelity.

Similarly, Scorpio man Aries woman compatibility is a sensual, raw fascination which seems compelling for both of them. It will be a constant battle over who will call the shots and will struggle because of his inability to move on when they argue. When they take things into the bedroom, they will find energetic and interesting ways to connect with each other.

Passion for the Scorpio man Aries woman Zodiac match will be extreme and zealous. They will not be able to explain to their friends the amount of feeling they generate in each other. The chemistry between them is ignited by the Scorpio man as he is one of the most sensual personalities. The Aries woman delights in sex every bit as much as he does.

Scorpio man Aries woman sex will be impulsive and out of control, like everything else in their lives. The Aries woman will be able to concentrate on the pleasure she receives. The Scorpio man will have a partner that he can lose control with. He will take her to heights that she never imagined. She will feel fully ardently connected to him. They will not hold back from taking the time to explore each other and find ways to please each other.

Marriage between the Scorpio man Aries woman lovers might not be an absolute for them to be happy. Once they bond, their relationship can go the distance. They will create a comfortable and warm environment to raise any children they may have. Scorpio man Aries woman marriage would bring out, loving and caring parents who always put their children first in making life choices. 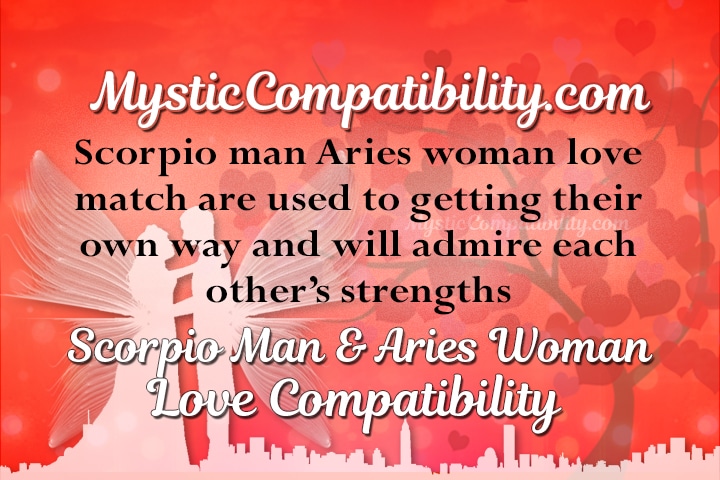 Scorpio man Aries woman in love will be mutually affectionate and loyal to each other. Once they have agreed to commit, it will be for keeps. They will share a love that is raw and emotional and are able to form a deep spiritual connection. The Scorpio man Aries woman soulmates have the ability to create a heart-warming home for their family.

The Aries woman is impulsive and the Scorpio man will submit to her need for adventure. His methodical nature will cause her to stop and take a breath to meet up with him. They have the strength to create an exciting and adventurous Scorpio man Aries woman relationship. When they find the balance between them, they will be a formidable force to be reckoned with. The serious Aries woman will need to circumvent his mystery. When the immovable Scorpio man is able to embrace her ego, their idiosyncrasies will bring equilibrium between them.

There will be plenty of arguments between them, he being very commanding, and her being extremely powerful. The Scorpio man Aries woman compatibility duo are both very confident in their beliefs. Neither is known to be the first to admit that they were wrong. There will be many arguments that go unresolved between them.

The subtle Scorpio man is sneaky in his approach. The bold Aries woman does not hold back from stating her opinion. Once Scorpio man Aries woman marriage compatibility is going, neither of them will want to let the other have control of the status quo. It will be a battle of wills to see who is prepared to compromise. Her fiery temper and his stubborn nature will be the starting point of disagreement for them.

When the Scorpio man wants to attract the Aries woman, he should not rush into trying to convince her. If he makes the wrong move, he could lose her forever. He will not be the only suitor that is trying to captivate her heart and the challenge will be to stand out from the crowd. In fact, he may just have to let his guard down and reveal a little of his true nature. She will find it enticing and her interest will be revealed. He should trust his perception in understanding what intuitively works for her.

When the Aries woman is trying to attract the Scorpio man, she should be confident in her approach. She should not attempt to try and understand where he is coming from. A flirtatious and engaging approach to their rendezvous will work wonders to get his attention. He will sit up and notice her if she is unafraid to impress him. Her actions will speak volumes for him. He is very passionate and will equally respond to her advances.