The Scorpio man Virgo woman compatibility will be a union of two people that share a holistic sense of honesty. When they first meet each other, it certainly won’t be an immediate attraction for either of them. He is brave and adventurous and she is balanced and steady. They will discover that albeit they seem very different on the surface, their different personality traits actually blend really well together with her stability and his control.

Their friends will wonder what is going on between them. This is because they will appear as reserved in front of other people. They will be intrigued by each other wanting to know what is happening below the surface. The Scorpio man’s outlook and depth of emotions will intrigue her to the point of no return. The Virgo woman’s perception will engage him as he feels she can understand all his inner emotions and feelings. She loves the way he wholly gives of himself in every activity he engages in.

When they decide to initiate a Scorpio man Virgo woman relationship there will be a solid devotion between them. The Scorpio man will become the Virgo woman’s protector. In doing so, he will also be her biggest supporter. She will be completed devoted to him, loving him as she has no other. When they are able to lighten up and enjoy their relationship for what it is, instead of worrying about getting it right.

The Virgo woman gives her all when she is in a committed Scorpio man Virgo woman love match. Although the Scorpio man will enjoy her utter devotion, it does have its setbacks too. His stubborn nature will not even consider changing any of his personality traits for anyone. She, in turn, has a tendency to keep asking about a situation when she does not like something. Her continuous suggestions for improvement will eventually result in frustration and resentment for him. The Scorpio man will be tolerant of her but will continue on doing whatever he wants to regardless of her feelings.

The pragmatic Virgo woman will at times lose patience with him. Her devotion will keep her coming back to her mysterious and dark Scorpio man. He will try not to hurt her, but at times he will not hold back from letting her see his fiery and spiteful outbursts.

Scorpio man Virgo woman compatibility will make sense to only them. They are completely aligned from a sexually and mental perspective. She is flexible and prepared to handle anything he throws at her. His love for her is what will keep him coming back for more. The Scorpio man Virgo woman couple has the ability to be tenderly devoted to each other for the rest of their lives.

Romance for the Scorpio man Virgo woman lovebirds is very much under cover and will only be revealed much later in their relationship. When they are able to quietly sit together and share their inner fears, which is when the romantic level of their relationship starts to build. Their tenderness to each other will become evident as the romance blossoms.

Passion existing in the Scorpio man Virgo woman Zodiac match will have its place between keeping the house tidy and the finances balanced. It won’t be evident at first to anyone around them whether there is any passion between them at all. It will become more evident as time goes by, and they begin to feel safe and open up to each other.

Sexually their connection will be substantial. The Virgo woman’s trust of the Scorpio man will give her the confidence to reveal her inner sensuality. When Scorpio man Virgo woman soulmates come together, he will be passionately tender with her. After some time, when their relationship has been stable for some time, they will find a sexual routine that works best for them. They potentially can become ritualistic in their approach to their love making. Particular days will be set out when sex can take place and certain steps to be taken for engagement to be successful.

The good news is; Scorpio man Virgo woman marriage will be successful. This is because of their mutual need for precision and attention to detail. When they need to focus on the household budget and ordinary responsibilities, they will be in their element. They will be so focused on getting things right that any emotional issues will take a back seat. This is not necessarily a bad thing, as it means that they will have fewer arguments and fewer hurt feelings due to some lack of affection. They are mutually proficient in whatever they endeavor, which goes a long way to a successful marriage. 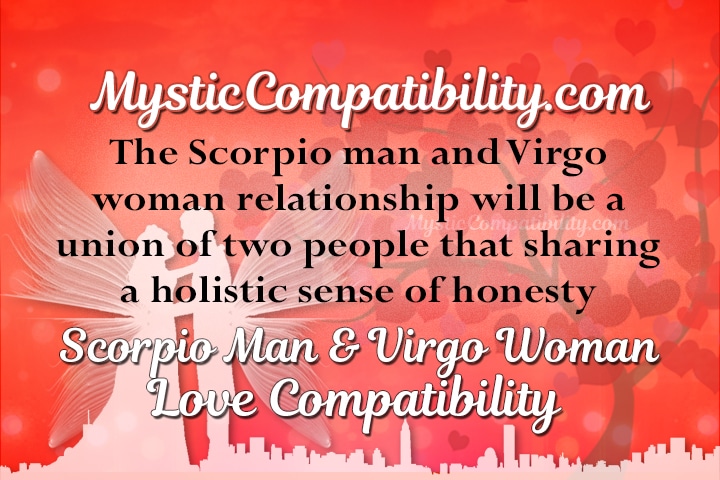 Scorpio man Virgo woman partners are mutually intuitive, and she will be intrigued to figure him out. Her confident manner catches his attention, especially when she is able to keep up with him. At times the Scorpio man can be a bit possessive, but she won’t be intimidated as she prefers the more submissive role within a relationship.

The Virgo woman will be completely devoted to the Scorpio man. Her perfectionist nature will want the best for him. He can be dominant and her subservient nature will compliment him completely. With their varied characteristics, they have the propensity to ensure a robust relationship.

The sometimes secretive Scorpio man will not always share everything with the Virgo woman. Initially, she will not feel bothered. As time goes by and their Scorpio man Virgo woman friendship develops. Consequently, she will want him to be open and honest with her. When this does not happen, it will result in problems between them.

The Scorpio man can be adventurous and ready to triumph over just about everything. The Virgo woman will eventually want to slow down and take a pause. His overbearingness and her gentleness will come up against each other. When they find that there are too many differences, they might not stay together.

When the Scorpio man wants to get the attention of the Virgo woman, he should ensure that he is neatly dressed and comfortably flaunt his career successes. He needs to ensure that his car is also clean and shining, as she will notice if it is not. When he makes promises to her, he should at all times be true to them. He won’t be alone in his endeavors to steal her heart, so he needs to be aware of her criteria and act on it. Refined and pretty gifts are always proper for a successful relationship scenario.

When a Virgo woman wants to attract a Scorpio man, she should aim to show him her usefulness in his life. Sad as that may sound, it will really work for her. She should be business minded in her support of his little power struggles and he will be hooked for life. Her stable and confident personality, when he has one of his fiery outbursts will go far in impressing on him that she is the right girl for him.

Scorpio man Virgo woman compatibility is over when either of them come to the realization that their relationship is not going anywhere fast. Their realistic and intuitive outlook will mean that they would probably have seen it coming before it actually gets to the point of breaking up.