Scorpio man Leo woman compatibility has the potential to go the distance. Initially, it might seem that there is not much that they have in common. He can be intense and gloomy whilst she is sociable and pleasant. The Leo woman loves to party and she wears her heart on her sleeve. He is intrigued by her. The Scorpio man is in the middle of the crowd entertaining everyone. When their eyes meet, they will sense the power each one has. They will understand that they might never be able to control each other, but they will certainly have fun trying.

The Leo woman wants to continually be admired and revered. The Scorpio man will adore her but he is certainly not going to reassure her of it each and every moment. His ability to delve into depressive and dark temperaments will frustrate her happy outlook. She will want to reach out to him and help him find his happy place. He will resent her constant attentiveness when he just wants to have some alone time. The possessive and jealous Scorpio man is very determined and unwavering. With her need for constant flattery, the resolute Leo woman will potentially mistake his jealousy as flattery which can work in their favor.

Scorpio man Leo woman romance will be played to the maximum. Friendship will be non-existent for them. It’s all or nothing when it comes to relationships and romance. There is very little possibility of them to be unfaithful to each other. They are mutually egotistical and possessive and thus will keep focusing on each other rather than looking elsewhere.

Financially they will be able to create a very positive and quantifiable Scorpio man Leo woman relationship.  The Leo woman has a kind and caring disposition and she will adjust to tolerate the Scorpio man’s fluctuating emotions. Generally, she won’t make allowances for anyone, so the connection with the Scorpio man is a genuine one. This is clear evidence of her love for him. His love for her will need to be communicated more fully if he is to make her happy. When he is willing to make the effort and reassure her of his love, she will flourish in their union.

Scorpio man Leo woman compatibility starts to diminish when he rejects her attempts to lift his moods. They will mutually want to accommodate each other, which go a long way to their like-mindedness. This couple can be mutually passionate and playful, relishing in the uniqueness of their similarities. The Scorpio man’s intuition will pre-emptively ensure that all her necessities are met before she can even communicate them. This, in turn, will draw her closer to him and solidify their Scorpio man Leo woman union even further.

Scorpio man Leo woman sex is fiery hot. For him, it is a way to express his love for her and he will not hold back in doing so.  She, on the other hand, can be the channel to manage his emotional depth, which she will embrace and embellish.  He will sweep her away and help her experience things she would never have thought possible.  She will graciously accept all that he has to offer without hesitation.  They have truly met their match in each other.  Mutually they won’t waste any time taking their relationship into the bedroom. When they have arguments, sex will be utilized as a means to forgive each other.

Equally, Scorpio man Leo woman marriage can be a lasting union. Loyalty and stability are part of who they are and they are unafraid to give that to each other. Mutually they will only marry for love. While she is feeling fulfilled and happy, she will never be unfaithful. He, on the other hand, will stay in the Scorpio man Leo woman relationship even if he is unhappy. Should he cheat on her, she might look the other way because of the love she has for him. When they choose to have children, they will be loving parents and create a comfortable home to raise them in. 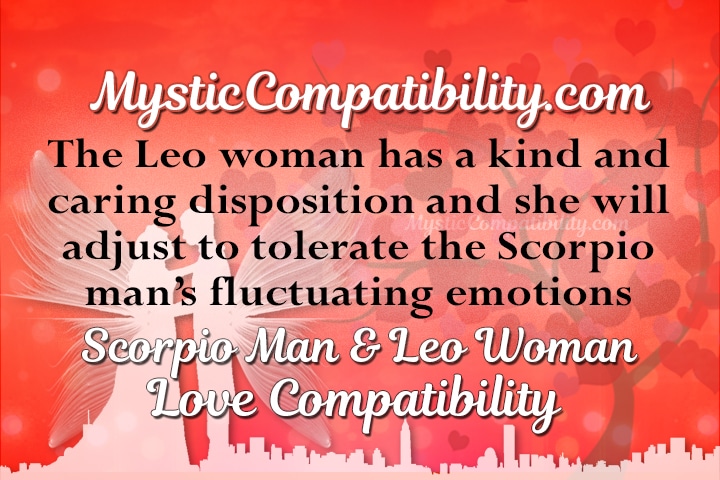 Mutually the Scorpio man and Leo woman demand respect and admiration. They are equally focused. Hence their Scorpio man Leo woman love compatibility will not be tedious. Her trailblazer personality will have met her match. He is a frontrunner that will be resilient enough to face any challenge she might throw his way. The Scorpio man jumps in with both feet when he sees the value in anything. Her devotion and his sustainability will result in them putting in the needed effort to make the relationship a success.

The Scorpio man Leo woman compatibility will be so alive. Others will be totally envious of the obvious connection between them. They will keep their connection flourishing with their constant endeavors and exciting adventures. The Scorpio man Leo woman lovers will never have a stagnant relationship, with constant activity to keep them interacting with each other. Whatever they are endeavoring within their relationship they will support and encourage each other to make a success of it.

The Scorpio man Leo woman in love are so alike that although the good stuff is good, the bad is bad. Their sparring egos will frequently bump heads. The Leo woman is comfortable with taking the lead and will not easily want to hand over the reins to the Scorpio man. They equally desire dominance and this will lead to heated disagreements.

The combination of an arrogant Leo woman and a possessive Scorpio man can result in vehement clashes. When they are not in agreement on nor want to relinquish control of their future goals, there will be no stopping the intense battles that will follow.

In order for Scorpio man Leo woman Zodiac match to thrive, he needs to remain in complete control of himself. She will be blown away by his self-confidence, mesmerized by his decorum and imperial outlook. He should avoid showing signs of weakness, and be sure to sincerely compliment her. Most importantly, don’t fawn over her, she will eat you up for breakfast.

When a Leo woman wants to attract a Scorpio man, she can make the most of the prospect to strut her stuff. She should make eye contact and hold it, confident that he will take up the challenge. He will immediately be attracted to her. When she gives the impression that he just might be able to control her, he will be hooked.

Scorpio man Leo woman compatibility is over when they embellish their wounds and create settings of duplicity. Not holding back from fashioning situations about disturbing behaviors which can be unnecessarily weighty and overbearing. There will be no turning back once they have burnt their bridges. The relationship will end catastrophically.