Scorpio man Taurus woman compatibility stands a good chance of going the distance. That is if they survive the tumultuous courtship rituals. Once it gets going, to keep it going it would take almost the same amount of work. The Scorpio man is an intensely, emotional man who has quite an enigmatic aura about him. The peaceful and tranquil Taurus woman’s manner is what will draw the Scorpio man to her. He would prefer an easy-going relationship and in her, he is able to envisage the possibility. His stable nature gets her attention as she instinctively knows that he won’t be contemplating anything foolish that could damage his Scorpio man Taurus woman relationship.

They have the propensity of being a real power couple. He is intense and she is steadfast, and together they have the ability to expand each other’s boundaries in very advantageous ways. The Scorpio man relies on his instincts and perception when making a decision. The Taurus woman relies more on a realistic and hands-on point of view. They are mutually tenacious and unbending, adopting a position and then not easily going back on it. The Scorpio man Taurus woman soulmates are both guarded against getting wounded or making a blunder. Neither of them will hurry into something before thinking long and hard about it.

This Scorpio man Taurus woman couple operate on very different emotional platforms. Any compromise between them will take a lot of arduous effort. He is extreme and prone to mood swings, whereas she is composed and thinks before jumping in. She will eventually feel exasperated by his temperament, and he will feel that she is too aloof and edgy. The Scorpio man can be manipulative when it suits him. The Taurus woman is basically as honest as they come. Mutually they are prone to a level of possessiveness within their relationships.

Scorpio man Taurus woman friendship can sometimes be a better option than the road of an emotional roller coaster relationship. He can sometimes prefer time alone but is looking for his soul mate. He can be very loyal and will think of her as his best friend. She, on the other hand, will gloss over the thought of friendship, as she has enough of those already.

Equally, Scorpio man Taurus woman compatibility can be passionate, but potentially not very sustainable. From the start of their connection, things can be problematic. When they are able to work together they are able to have the best of both worlds, creating a really strong bond between them. The Taurus woman is able to provide assistance to the Scorpio man when he hits rock bottom. He appreciates the support but is looking for a partner that is prepared to get down and experience rock bottom with him.

The Scorpio man has a reputation for being the least romantic and diplomatic individual around. Should the Taurus woman be looking for some romance, he is certainly not the man for her. This does not necessarily mean that a Scorpio man Taurus woman in love can never thrive. There is an ability to create a connection based on intimacy, exploration, and bonding through sharing themselves and their life stories with each other. Once they realize that they can trust each other, there will be no holding back from opening up to each other.

The passion between the Scorpio man Taurus woman Zodiac match will be tumultuous. He will be dispensing the flood of passion into their relationship. She will not object, but also won’t be matching any lust from her side. This relationship will be more about the sexual connection than the actual consummation of sex. Somehow this works for both of them and does not hold them back from having a truly exciting and gregarious sexual encounter.

Scorpio man Taurus woman marriage will be a permanent bond. Neither of them is flippant about the idea of flirting with other people or unfaithfulness. Love for them is a very serious commitment that is not taken lightly. Mutually they are possessive and will feel that once the pledge is made, they wholly belong to each other.The Taurus woman will be supportive of his career, as it enables her to have a comfortable home. She will manage the finances very well, and he will happily ensure she stays at home with their children. 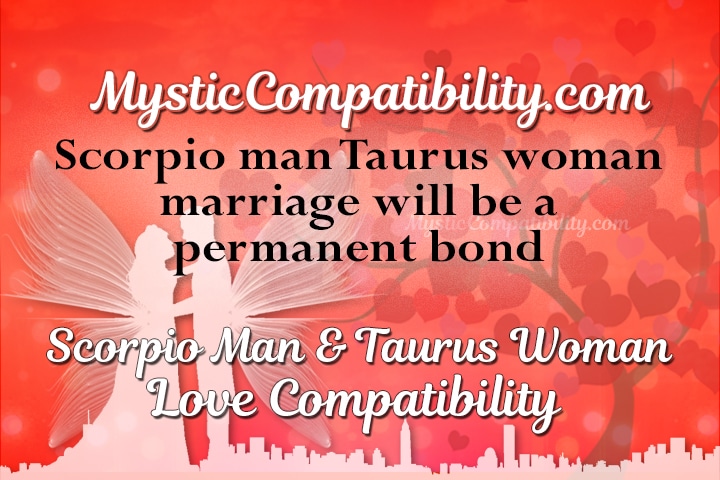 The Scorpio man Taurus woman love compatibility pair are both similarly approving of their companion’s energy and determination. There will be an incredibly unspoken emotional connection between them. He has the propensity of making her feel extra special, and she will respond by letting him wholly own her.

The soft natured and romantic Taurus woman will sometimes feel overwhelmed by the Scorpio man’s intensity. In actuality, they will feed off each other’s desires and she will flourish in their union. When they are able to get their relationship off the ground, they will be very loyal to each other.

The honest Taurus woman will find the mystery of the Scorpio man to be beguiling. It will eventually unsettle her, as she needs constant reassurance of his love for her. Albeit that he does love her, he would need to communicate it to her which is not something he is always comfortable doing. Her stubborn nature will make it difficult for her to accept that he cannot be more open with her.

The complex Scorpio man prefers not to show all his cards at the same time. The Taurus woman is rational and wants to proactively prepare for whatever might come her way. When he does not share things with her, she will struggle to understand his need for secrecy. If he does not find a way to address her fears, she will end up feeling muddled and lonesome.

When the Scorpio man wants to attract the Taurus woman, he won’t need to exert himself very much to acquire her attention. His aura of danger will be an immediate attraction to her. She can be a bit delicate, so he should hold back on some of the intensity. This is to not scare her away before they get a chance to start a relationship.

To ensure that Scorpio man Taurus woman love compatibility thrives, she can come across as a little naïve. When he starts to circle around, she can wait off on the side for him to make his move. He can be a bit intense and overwhelming, so she should be sure that she is prepared to potentially get burnt by this relationship.

Scorpio man Taurus woman compatibility is over when they push each other too far with their impulsive actions and mistakes. They are essentially all or nothing, the Scorpio man can be so brutal that her self-worth will be bruised. He might just find that the Taurus woman strips him of all his belongings while she is walking out the door.