Scorpio man Sagittarius woman compatibility duo are an unlikely pair, but their relationship will most definitely be a fiery sexual one. His serious manner and her happy and nonchalant outlook are not a deterrent to their attraction to each other. Potentially his dark and ominous element of danger is what fascinates her. She has a contagious and pleasant nature, which is what attracts him to her.

In the Scorpio man Sagittarius woman love compatibility, they won’t easily connect unless they meet in passing. This is probably due to her inability to sit still for very long, she is always on the move. His sociable nature will ensure that he is often surrounded by a group of friends. She will pause to take a second look due to his mysterious manner, and he will find her active mind animating. Moreover, they will find that they have a variety of topics to converse on, albeit that he is a bit more reserved than her to share what he is thinking.

Scorpio man Sagittarius woman lovers are mutually dominant, with a strong intuition that they equally appreciate. She relies on her heart when making decisions. On the other hand, he completely relies on his perception which doesn’t always align with her. This is where they differ and what oddly draws them to each other. There will be no mind games between them, what you see is what you get. Hence, they mutually believe in being truthful which is unusual in other relationships.

The unrestricted Sagittarius woman wants independence more than anything else. In contrast, the controlling Scorpio man is determined in his approach for control, which will extend to his partner. She will become annoyed when he turns out to be frustrated by her refusal to settle down. Scorpio man Sagittarius woman love match would not want to settle down. When she wants to move on, he will need to work really hard to make her feel special all over again. As the relationship goes on, he will become emotionally fraught and umbrage can set in. His moods will become draining for her, and she will struggle to understand why he needs to be so melodramatic over everything.

They can seriously hurt each other, with her bluntness and his sensitive nature. When it suits him, he has the ability to be spiteful which seriously mystifies the honest Sagittarius woman. There is mutual respect in the Scorpio man Sagittarius woman relationship which helps them to get on really well with each other. Whether they are able to create a truly happy and working relationship is seriously debatable. They are mismatched on almost all their personality characteristics.

Scorpio man Sagittarius woman compatibility will probably be based on sex. They will soon discover that they do not share any mutual emotional understanding of each other. Control issues will be where their relationship begins to struggle. When he wants to governor her, she will resist and prefer her freedom. This will result in him becoming moody and she will become impatient with his reactions. He will become frustrated with her impatience. When they are having relationship issues, their compatibility might not be able to save them.

The passion in the Scorpio man Sagittarius woman zodiac match will be mutually gratifying. When it comes to romance, they will prefer to rather get on with things. They will come to realize that they can have an intense lust for each other. There is a mutual willingness to explore and spent many hours to try and pleasure each other completely. The bond between them will be solidified by their desire and satisfaction they experience with each other.

Furthermore, Scorpio man Sagittarius woman sex will be an enlightening experience, especially for the Scorpio man. He will bring the lust into their love making which will then heighten things to another level altogether.

Marriage between them will be an honest commitment to fidelity. In the Scorpio man Sagittarius woman marriage, they would mutually value openness. Communication is of vital importance to both of them and will help in making a success of their marriage. Compromise will come easily to them once their sexual relationship has initiated. The Scorpio man will be the wage earner and he will carefully manage their finances. The Sagittarius woman will foolishly spend whenever she has the inclination. They will drive each other crazy with their different outlooks on financial matters. 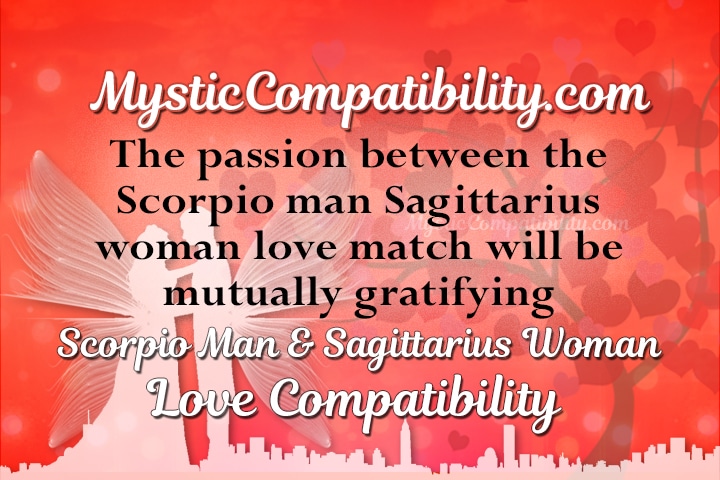 The Sagittarius woman will rise to the challenge of trying to work out what makes him tick. Her carefree attitude will not dwell on his enigmatic personality. He finds comfort in knowing that she is not pressurizing him to reveal anything.

The Scorpio man can be charming and witty but it doesn’t compare to the Sagittarius woman’s energetic and fun personality. They are able to offer each other a very different outlook on life. She will welcome the fervent and pleasurable scenarios that he will create. Mutually, Scorpio man Sagittarius woman soulmates are passionate and he will appreciate her ability to keep up with him.

The Scorpio man is a serious player, who is in for the long haul. The carnal Sagittarius woman is always on the lookout for a fun time, and he will feel that she is not taking things seriously. He will be looking for a commitment and her attitude will give him the impression that he is wasting his time expecting it from her. His somewhat possessive manner will eventually be grounds for her to walk away.

The Scorpio man has a fiery temper and he will anticipate the Sagittarius woman to respond in kind to defend herself. She will be unperturbed by his attitude and not be phased by what he wants. Initially, he will give her the freedom she needs. However, he expects her to show her devotion in return. There will be frustration between them, and a lot of compromises will need to be agreed if they want the Scorpio man Sagittarius woman love to work.

When the Scorpio man wants to attract the Sagittarius woman, he will find it difficult to get her responsiveness. When he is able to catch her attention, he can give her a quirky comment to get her attention. Once he gets her to laugh, she will be captivated by him.

When a Sagittarius woman wants to get the attention of the Scorpio man, she can reveal her light and fun outlook. Her playful personality will be able to cross his boundaries like no other woman has been able to. Once she has his attention she can pull back and let him take the lead. Then she can be herself and play a little hard to get, he will come running to her for attention.