The gregarious Libra man and outgoing Aquarius woman have the possibility of having a sociable and an exciting connection. Libra man Aquarius woman compatibility couple will have a non-stop conversation from the get go. There is mutual respect between them and their mental affinity goes without saying. Intellect and a wicked sense of humor is what binds them. They are both equally social creatures and are always up for a great non-stop party. When they are first spotted at the same party, neither of them will hesitate to make the first move. It will just depend on who is the first one to come over.

When they initially start up a conversation they find that they are able to easily talk for ages. Between his conversation skills and her theories, they are not without a host of different topics that interest them. She is idealistic and unwavering. He will help her envisage what it takes to put her goals into place. The indecisiveness of the Libra man is where the Aquarius woman comes to the fore. When he is wavering on what to do next, she will assist in bringing things to fruition. His realism grounds her when she needs it most.

Libra man Aquarius woman in love are not concerned about control issues. They do not take things personally and are shrewd without any emotional complexities. Analysing their feelings to ensure accurate expression of what they are experiencing is high on their agenda. Libra man Aquarius woman friendship is high on their agenda, with them being equally attentive and trusting in each other. They are completely on the same wavelength.

Friendship will be high on their personality traits. The Libra man Aquarius woman zodiac match will have a ton of good friends. Their relationship will be upbeat and trendy. The stable Libra man will bring the steadiness and the exciting Aquarius woman is all about excitement and surprise. Together, their lifestyles and ideas are fuelled by her creativity and his wisdom.

Libra man Aquarius woman soulmates will want the best for each other. Their confident way of relating with each other will make them the best of friends. Both are prone to focussing on fanciful and visionary things instead of reality. Intellectually, they will talk about life instead of getting out and experiencing it.

If they find themselves in love with each other, they might continue to put up with the each other’s idiosyncrasies. When the Libra man Aquarius woman relationship has gone one for some time, the Libra man will want a firm commitment. The Aquarius woman will not have enough emotional feeling to pay him any attention. His emotional demands will become too much for her and she will walk away. She is not the typical woman and loves going against the norm. Its part and parcel of the confident Aquarius woman.

Their compatibility provides the Libra man Aquarius woman love match with ample opportunity to discuss things until a joint agreement is obtained. The Aquarius woman is not prone to compromise and the Libra man will find that he is always giving in to keep their relationship alive. What will work for them is if either of them is away for extended periods of time. They will have the opportunity to love each other without feeling the pressure of being inseparable.

Passion for the Libra man Aquarius woman lovers will not be part of the setup. The Libra man finds it to be trivial and not mandatory for a good relationship. The Aquarius woman may at times find a cause to be passionate about. Not for long and she will be off on the next wild adventure. It does not mean that they are not able to recognize how to completely satisfy each other.

Libra man Aquarius woman sex will be comfortable and without egotism and lust. Both want a sexual relationship that is unpretentious and uncomplicated. Her adventurous spirit will bring in some fantasy play and he will without objection, graciously accept. He will go out of his way to ensure that she is pleasured during their love making. She will feel special in ways that she never imagined.

Moreover, Libra man Aquarius woman marriage will be solid. They will believe that they have found the perfect soul mate and will look no further. Her active mind and adventurous spirit will result in her avoidance of the mundane household responsibilities. The caring Libra man will happily comply and organize their home into a workable routine. Whilst he is handling the household matters she is able to go off and pursue her other interests. 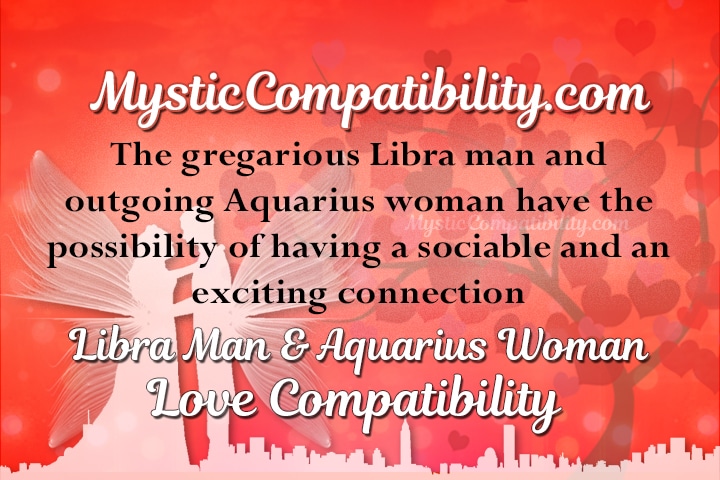 The relationship in the Libra man Aquarius woman sun signs is all about pleasure and enthusiasm. Neither of them wants to be in charge. When she wants to make a decision, he will not object but will support where he can. Their relationship will be light and undemanding.

Communication is a strong suit for the Libra man Aquarius woman union. When they disagree on matters they will easily be able to talk things through until they reach an amicable agreement. When they are able to focus on their similarities this couple can go the distance.

Romance is not high on the list for the Aquarius woman. The Libra man on the other hand is very romantic. When he tries to woo her, she will find it amusing. Further along in their relationship he will try and get her to settle down, she will become frustrated by his continuous efforts. Their Libra man Aquarius woman marriage compatibility will slowly disintegrate until there is nothing left. Neither of them is emotionally connected. They enjoy the company of each other, but any deep connection could sadly be lacking. The association between them might be superficial.

The stubborn nature of the couple is what causes contention for them. Her rational thinking will be her guide and his logic will not be ignored. They might not agree on much, and when the Aquarius woman disagrees with the Libra man it will result in arguments between them.

To guarantee that Libra man Aquarius woman affair blossoms, he just needs to be confident enough to talk to her. She will be surrounded with admirers, but with his social skills and charming personality, she will be immediately drawn to him. When he is able to hold a conversation with her, she will respond favourably to him. Her rough edges can be smoothed over by his diplomatic skills. His natural protective instinct will be a comfort for her.

When the Aquarius woman wants to get the attention of the Libra man, her confidence will help him become more decisive, so she can ask him about his plans and offer constructive ideas. Her enthusiasm will draw him to her. He can at times be indecisive, so she will need to help him come to the realisation that they are a good fit.