The Libra man Virgo woman compatibility relationship will be a complex connection. She is reserved, watching the confident and flirty man from across the room. When he notices her, he will not hesitate to make his way over to her. He will appeal to her mental perception, always looking at both sides before making a decision.

Trust is what will draw Libra man Virgo woman sun signs to each other. When meeting up, the cautious Libra man will sense that she is someone he can trust. The Virgo woman is very selective in her choice of men and will feel secure in the trust that they are able to share. There will be many things for them to talk about. The shy Virgo woman will easily feel comfortable with the charming Libra man.

When the Virgo woman feels confident with the Libra man, she will open herself up to many hours of enjoyable conversation. They are mutually intellectual and will find that they have a lot in common. Although neither of them is known for temper tantrums, the Virgo woman will try and suggest to the Libra man ways to improve himself.

During their courtship, he will endeavor to use grand gestures to woo her. The Virgo woman will plan out everything to the finest degree. Should he continuously be late for dinner, or not deliver as promised, she will become angry. Her feelings will be that he does not place the same value on their relationship as she does. In her view, she is trying to help, but he will view it as her nagging to get her own way. Her constant criticism will undermine him, and he will feel that he is not good enough for her. He too can be infuriating for the Virgo woman, especially when he is indecisive. She will become irritated with his social habits constantly intruding on their time alone.

What really works on her nerves is when he refuses to argue with her. She will want to talk about their problems, and he will prefer to keep the peace. He might decide to withdraw completely from the situation instead of delving into why things are problematic. This may result in many of their issues not being resolved and frustration will abound. Soon thereafter, resentment will set in the Libra man Virgo woman zodiac match.

At times Libra man Virgo woman love compatibility duo will be able to debate on many different matters. When the Libra man refuses to talk about things, it creates more problems for the future. They will potentially disagree on finances. He generally likes to lavishly spend and she would rather save for another day. The ability to find common ground in their dating and intimacy will be unconventional. Their Libra man Virgo woman relationship will be extremely precious to them.

Libra man Virgo woman compatibility will depend on the Libra man not giving in to her too easily. They have the ability to plan their creative ideas practically. She will support him when he takes the lead in their relationship. They will not be unkind to others, but rather treat everyone exactly the same. The Virgo woman will need to allow the Libra man to sometimes make mistakes. Additionally, she expects him to return to her and ask for forgiveness. He will need to take a moment to ponder his next move. She will not intervene but sick back and wait on him.

Undeniably, Libra man Virgo woman sex will be imaginative and full of fantasy play. There is much respect between them as they prefer to keep things private. He is a generous and a romantic lover and with her sensual nature, they can make magic. Her intuition will serve her well in pleasing him. He will make sure that she too is able to enjoy their love making.

Libra man Virgo woman marriage will work extremely well for the couple. He will want to build a perfect family environment with her. Their home will be comfortable and ready for any children they may choose to have. A relationship between them has the possibility of being warm and gentle. There will be many intellectual discussions between them and they will teach their children to do the same. Their children will be disciplined, well-behaved and good mannered. Financially they will ensure that they are able to care for each other and their family. 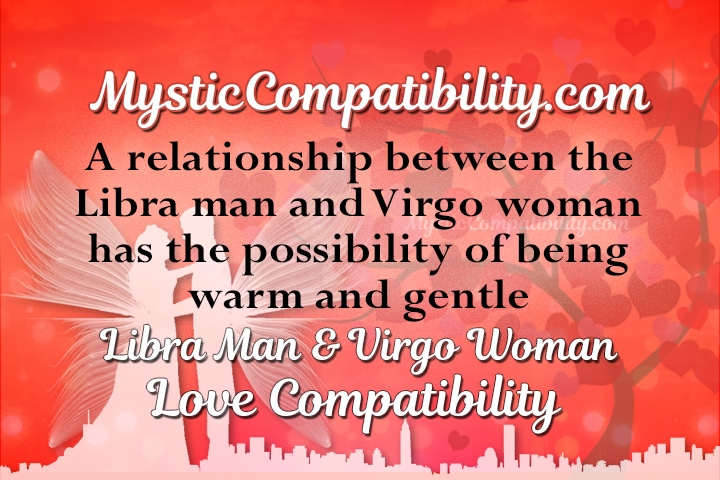 Once the Virgo woman makes a commitment, she seldom strays from it. The Libra man is much more indecisive than she is. Should he decide to let her make the final decision on matters, it will work out well for them. She may want him, to step up and take the lead. Libra man Virgo woman soulmates will exert efforts needed to keep their relationship a success.

The kind and gentle Libra man is sensitive to the insecure Virgo woman’s feelings. He will want to show her his commitment to their relationship. She feels very secure with him and deeply respects his commitment to her. When they are able to work together to overlook the other’s shortcomings, their relationship will go the distance. Furthermore, there is good communication between them.  Hence, they will easily agree on ways to overcome their issues.

The Libra man will want to spice things up in the bedroom. The Virgo woman will not accept change very easily. He might become bored with their sex life when it is the same each time. When he tries to push for things to become more exciting, she will hesitate at the idea if she is not ready for it. If he pushes the point, there will be many arguments between them.

The Libra man will want to enjoy an extravagant lifestyle. The Virgo woman is completely opposite in that regard. She defines lavish spending as frivolous. If he does not allow her to help with the finances there will be many arguments between them.

For Libra man Virgo woman love match to thrive, he can exhibit his charm, social skills, and planning abilities. She will be fascinated to be with someone who can take care of her. His stable nature can bring order to their lives and she will be drawn to him. She is naturally insecure and when he exhibits his strength, she will embrace it completely.

When the Virgo woman wants to get the attention of the Libra man, she can revere him when he speaks. Paying close attention to whatever he is saying. He will be taken by her when she gives him more than the usual attention. He will immediately notice her and want to get to know her better. When she can get him talking, he will not hesitate to talk for as long as he can.

Libra man Virgo woman compatibility is over when they view things from different angles and find it difficult to agree on matters. They will have reached crossroads in their relationship and albeit both being logical, he focuses on the bigger picture whilst she is investigating the details.