The easy going Libra man and the intensely emotional Scorpio woman will quickly notice each other and immediately be intrigued. They generally seem to have a lot of mutual characteristics. Their rational thinking and common goals and pursuits draw them to one another. Their outlook towards life can at times be completely different. Nevertheless, they will make a go of it anyway. Potentially, Libra man Scorpio woman compatibility pair can be too close and start to irritate each other. They will need to search out new goals and agree on compromising at times. None of them gives up on anything easily. Thus, they will repeatedly try to make their relationship work.

He is unemotional and intellectual and likes to debate on various interesting topics. She, on the other hand, can be very volatile and her extreme reactions are totally foreign to him. Like all relationships, Libra man Scorpio woman zodiac match will have its own problems. His rational thinking will find him logically trying to solve all her problems that she brings him. His romantic side will want to be the hero to her fairytale. Happily wiping away her tears, when things become too hectic for her.His actions will reaffirm her trust in him.

Libra man Scorpio woman in love They have the propensity to bring out the best in each other, and the worst. The Libra man is very level headed. The complex Scorpio woman is able to feel tranquil when he is around. She utilizes her seductive powers to bat her eyes and immediately get his attention. He will succumb to her wiles and giver her all that she asks of him. His romantic personality will expertly respond to all her needs.

The confident Scorpio woman needs things to always go her way. The steady Libra man will insist on following his own decisions. To obtain agreement will not be easy. When they are faced with choices and cannot agree on an outcome, he will happily step up to the plate and take charge. She might not reject him outright at first. However, she will plan how to get back at him for blindsiding her.

The intellectual Libra man might be a bit frivolous for the emotive Scorpio woman. Her ever changing personality will keep him guessing who he will be engaging with when she comes home. He would prefer a stable partner, and the Scorpio woman is far from what he imagined. Their Libra man Scorpio woman love compatibility will definitely not be boring and this will keep them on their toes.

The unusually jealous Scorpio woman will resent the ever social Libra man when he always wants to be out in town. She understands that he is faithful, but her suspicions will get the better of her. He will take exception to her accusations and be deeply hurt by them. Sadly she does not know when enough is enough. He will find her unreasonable and challenging to live with.

None of them fully understand the other. The logical Libra man will be able to read the signs. He will have started to detangle his feelings when their relationship eventually breaks down. His apparent aloofness will deeply hurt the Scorpio woman. Although that was never his intention.

Truly, Libra man Scorpio woman compatibility will be a struggle. He has a total lack of understanding for her temperaments. She in turn completely misunderstands his seriousness. The Libra man might just have bitten off more than he can chew. Neither partner portrays the ability fulfill the desires of the other. The Libra man Scorpio woman relationship can only work when they both have good love compatibility and empathy for each other.

The passion between them is an eye opener for the aloof Libra man. As lovers, the Scorpio woman will have to take the lead. Initially, her ardor will enthrall him. He is gullible enough to accept that he is the only one for her. Eventually, he will hate himself for being so weak when she seduces him to get her own way.

Libra man Scorpio woman sex cannot be detailed in its entirety. The emotionless Libra man will have far more emotion to deal with than he has ever before. This is all a new territory for him, and he will be like a child with a new toy. She will happily initiate him into her world of intrigue. They will enjoy exploring new heights with each other. 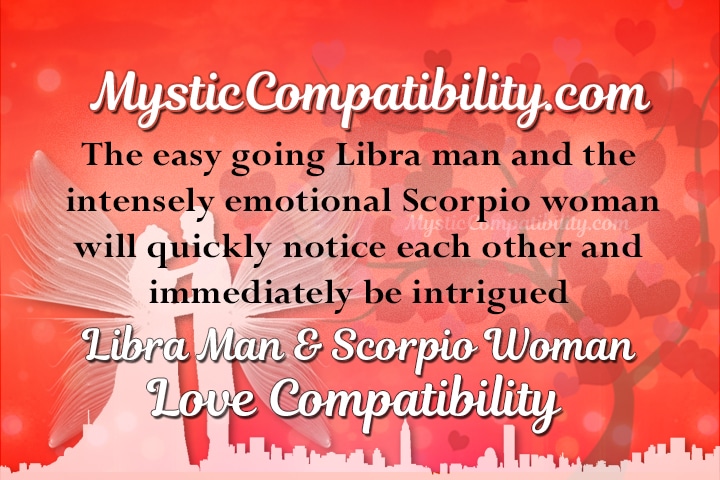 The mysterious Scorpio woman is alluring to the social Libra man. Neither will hesitate to engage each other. Communicating will be easy for Libra man Scorpio woman soulmates as they start to investigate their respective personalities. The Scorpio woman will not reveal everything to ensure she keeps him coming back for more.

The Libra man easily understands the point she is trying to make and will challenge her anyway. Her charming nature and sharp mind will keep him intrigued. He will spend every moment trying to get to know her better.

The Libra man will not always enjoy the dominance of the Scorpio woman. She will find it hard to relinquish control easily. Only when she feels obliged because just maybe his ideas are better, will she give in. He will always attempt to do whatever is necessary to keep his companion happy. This will be a constant source of frustration for him. She will have to work hard to do the same. Most of the time she won’t get it right, which will anger him further.

The Scorpio woman is very straightforward. The Libra man does not easily come to a decision. She needs a stable companion who is on the same wavelength and will find it very infuriating to wait on him. Her jealous streak will be the catalyst for all his socializing. He will continuously have to reassure her of his affection. Libra man Scorpio woman lovers will both become tired of the constant battle of wills to keep their relationship afloat.

When the Libra man wants to get the attention of the Scorpio woman, he can use his charm to demonstrate his perfect manners. History dictates that she doesn’t very often get propositioned by a gentleman with honorable intentions. He can lavish her with small romantic gestures, while he awaits her approval.

For Libra man Scorpio woman sun sings to thrive, she should be supporting and encouraging of his career aspirations. At times he can be naïve, so she needs to be cautious to not scare him away.

Libra man Scorpio woman compatibility is over when the Scorpio woman’s jealousy gets the better of her. The Libra man will become tired of always needing to reassure her of his affection.